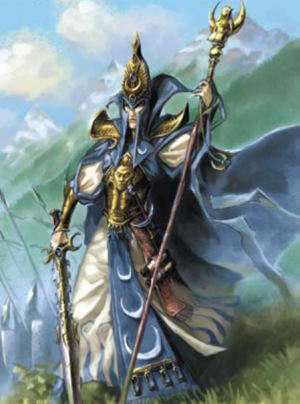 The Loremasters of Hoeth are invariably gifted warriors, for their intellects find even the exacting disciplines of the Swordmasters almost childishly easy to master. Similarly, each Loremaster has a faultless grasp of the principles of magical lore. However, he seldom wastes time in committing more than a sliver of battle magic to memory: he is concerned with weightier and more elusive spells that are little suited to the battlefield. [2a]

The path of the Swordmaster is not the only one taught within the Tower of Hoeth. Here can be found many disciplines of art, magic and war. Most scholars confine themselves to studying but a single path, honing their skills until perfection is achieved. Even amongst the rarified ranks of Elfkind, it is unusual to find an intellect capable of mastering an entire path, let alone show accomplishment in several -- but it is not impossible. Such is the achievement that marks out a Loremaster from a mere scholar. [2a]

Beyond this, it is rare to encounter two Loremasters who have trodden the same path to illumination. Even to an Elven mind, the realm of knowledge is a labyrinth, and none can explore all of its many chambers. Indeed, centuries of scholarship have left more than a few Loremasters with a touch of eccentricity. Nevertheless, no commander will spurn a Loremaster's services if they are offered, for their synthesis of magical fury and swordsmanship is truly formidable. [2a]

The leader of their order is known as the High Loremaster, a position currently held by the great Teclis.

The first gathering of Loremasters took place in -290 IC at the half completed Tower of Hoeth, a community of mages and scholar quickly began to grow about it. [1a]