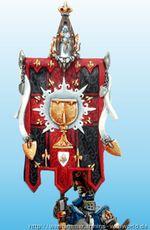 The Banner of the Grail Knights, showing the Holy Grail

The Grail is the symbol of the Lady of the Lake in Bretonnian religion. The Grail Knights also use it as an icon to symbolise the fact that they have fulfilled their Quest and drank from the Holy Grail.

The enchanted chalice kept by the Lady of the Lake, known as the Grail or the Holy Grail, is not like any other precious or magical item. It cannot be taken from her or kept by any mortal person. It is recorded in Bretonnian annals that a wicked and foolish Knight claimed to have possession of the grail. In reality it was a false grail with which he intended to fool and confuse good and virtuous Knights so that he could wrongfully seize the throne of Bretonnia. He met his well deserved fate at the hands of King Gaston de Beau Geste and the Grail Knights. This episode has passed into Bretonnian history as the 'Affair of the False Grail'.

At one point, the Grail was once again believed stole by Beastmen. When a pair of knights, Galeron & Joinville slew their warherd, it was revealed to once again be false.

From time to time, Questing Knights return from their wanderings bearing ancient golden cups or similar items which they have found in old burial mounds or glinting on the bottom of forest ponds. Such things do not fool Grail Knights who have seen the true grail and know its true appearance! Such false grails are revealed for what they are by Knights of the true grail and their finders must return to their quest or be disgraced.

The Lady revealed to Louen Leoncoeur that whilst the Grail is a divine artifact, it is also symbolic. Every mystical lake in Bretonnia is a part of The Lady's very being and thus the sacred water poured into the Grail is her own divine lifeblood.

2. Hammer and Bolter: The Court Beneath issue 25. By Phil Kelly