Warhammer: Mark of Chaos is a Real-Time Tactics computer game set in the Old World, based on the Warhammer Fantasy Battles tabletop game. The game was developed by Black Hole Entertainment and co-published by Namco Bandai in North America and Deep Silver in the PAL regions. The game was released for Microsoft Windows on November 14, 2006 in the United States with a subsequent release in PAL territories on November 23, 2006.[1] 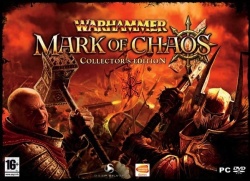 The game's gameplay is primarily focused on pure battlefield tactics, ignoring the classic RTS gameplay aspects of base-construction, resource gathering and in-battle unit production. Instead, the game is intended to be focused more on strategy battling with a set amount of forces. Mark of Chaos' gameplay is superficially similar to the previous Warhammer Fantasy PC games and the Total War game series. However, the basic gameplay model is significantly more simplified in comparison, and combat is much more akin to real-time strategy games like Warcraft III than other such titles. The control system is similar to the Total War and Dawn of War in that each regiment is directed and treated as a single entity.[2]

The game's main objective is the defeat of the enemy army by either completely destroying it or causing the remaining units to retreat from the field of battle. Battles are fought on many different landscapes and settings, with specific terrain types granting bonuses or penalties to specific units. In addition, units also have morale, and will break and possibly flee if they suffer enough damage or get hit by specific types of weaponry. They also possess stamina levels, which can cause them to lose defense and speed when it is sufficiently drained. As well as the standard units there are special "Hero" units; unique individuals considerably more powerful than the average man or creature. Heroes of opposing armies can engage in 1 on 1 "Duels", fighting un-interrupted until one defeats the other, resulting in a morale penalty for the losing side.[3]