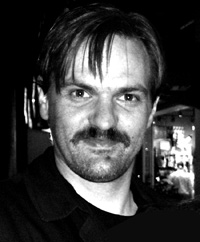 C. L. Werner is a novelist best known for his work for Black Library and the Warhammer Fantasy setting. Clint is an avid fan of Warhammer's Skaven army and the skirmish game Mordheim.

The blazing wastelands of Arizona, home to rattlesnakes, gila monsters, and other unpleasant reptiles such as C. L. Werner. A scheming, twisted little desert rat, he is continually dreaming up new and imaginative rule interpretations of the many tabletop war games he can often be discovered dabbling with. When not finding new ways to ensure the dominion of the Horned Rat, C. L. Werner busies himself with a vast library of horror and sci-fi films and an equally extensive collection of mystery and fantasy books.

His pen has been responsible for such characters as the infamous bounty hunter Brunner, the cunning sorcerer Thyssen Krotzigk, the ruthless witch hunter Mathias Thulmann, and skaven fifth columnist Skrim Gnaw-tail. Like Brunner, it seems there are no creatures too vile for C. L. Werner to have dealings with and he is currently rumored to be haunting old Sylvanian graveyards in search of 'fresh' material for further tales of dark adventure in the grim Warhammer world.[1]

The Chronicles of Malus Darkblade

Time of Legends: The Black Plague