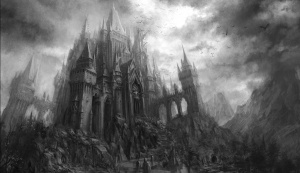 Drakenhof Castle is the accursed citadel of Sylvania.

It was from Drakenhof that Vlad von Carstein began his reign of terror, and from which battlements he summoned his Undead army. It was home to generations of von Draks before Vlad came, and some say it is the home of Mannfred von Carstein to this day.

Adventurers still seek the towering castle out because of the treasure trove of occult lore rumoured to be contained in its library. It is said that copies of all the great sorcerous works can be found there, shackled tight to shelves made from wood that bleeds scarlet in the candlelight, but no one who has sought them has ever returned.

The castle itself is huge, built on top of a massive cliff from where it dominates the surrounding forest. It has four mighty towers and a gigantic central keep, beneath which are a huge number of crypts, dungeons and abandoned torture chambers. Secret passages run all the way through the cliff and are said to come out in the woods.

The notorious poet-adventurer Felix Jaeger, purportedly the last living visitor to Drakenhof, reports that the castle seems abandoned, though thin screams emanate from its spires every night. The curtains and tapestries have rotted away, and the furniture is cracked and dusty. In the dining hall, the obsidian goblets, from which Mannfred and his lackeys used to drink blood, still stand undisturbed on the banqueting table. The walls of the great hall are hung all along with portraits of the Vampire Counts: tall, gaunt, red­ eyed men who have each carved a bloody furrow into history.

In recent years, it seems that some Undead evil has returned to the castle. Peasants in nearby villages claim their young people are mysteriously vanishing. Huge red-eyed wolves prowl the forest and keep trespassers at bay. By night, sinister coaches make their way to the castle on clandestine business, and the dead once more stir uneasily in their tombs.

Prior to the End Times, Mannfred von Carstein moved his power-base from Drakenhof to the more defensible Castle Sternieste.