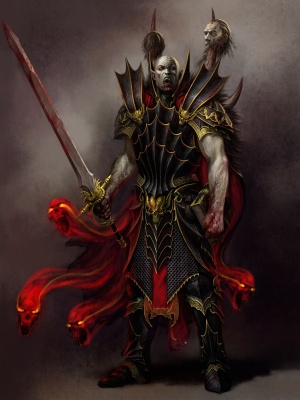 The last and often called the most cunning of the vampire counts was Mannfred von Carstein.

Mannfred's exact origins are unknown but the first mentions of him are during his Sire Vlad's reign over Sylvania. After Vlad's destruction at Altdorf (which some say Mannfred had a hand in), Mannfred disappeared for some time, letting his mad blood brother Konrad rule the province. During this time it is believed he traveled all over the world, perfecting his necromantic abilities.[3a]

He travelled to the lands of the Dead, visiting ancient tombs in Nehekhara and Lahmia, taking secrets for ancient liche Priests. Finaly he made his way to Nagashizzar gaining much magical lore and power. [3a]

After Konrad's destruction at Grim Moor, Mannfred returned to Sylvania to claim his throne. In 2132 IC he gathered a huge army together and marched them straight to Altdorf to finish the job his Sire started, in a campaign called the Winter War. Unfortunately, decades of war with the vampire counts had given the forces of the Empire time to gain knowledge of their enemy. The Grand Theogonist had studied the necromantic texts taken from Vlad's camp after his defeat and now knew the methods of unraveling and banishment. Even as Mannfred began to assault the walls his army began to fall apart and he was forced to flee.

This led to years of Mannfred playing cat and mouse with the Imperial forces, with neither sure exactly which was the mouse. After years of indecisive back-and-forth. Mannfred was forced into battle at the Battle of Hel Fenn with Count Martin of Stirland in 2145. After a close battle Mannfred was not only defeated but slain, though his body was lost in the bogs.

Many years later, the adventurer and poet Felix Jaeger described how he witnessed the resurrection of Mannfred at the hands of an inept necromancer. [1a] This tale, however, was widely dismissed (as were the majority of Jaeger's 'travels') by the citizenry at large and Mannfred chose to keep himself hidden, returning to Sylvania and retaking his place as the leader of the region without the world realizing it for many years.

Mannfred used this period to collect many of the world's most powerful necromantic artifacts- in particular seven of the nine books of Nagash and the great necromancer's mummified severed hand. It was at some point during this time that Mannfred moved his power-base from the traditional Sylvanian capital of Castle Drakenhof to the more defensible Castle Sternieste. The Vampire Count was preparing for war.

One of the more overt moves undertaken by Mannfred was the capture of Aliathra, the Everchild of the High Elves, daughter of the Phoenix King and the Everqueen. She had been sent as ambassador to the court of the dwarf High King Thorgrim Grudgebearer. Allying himself with the infamous Lichemaster Heinrich Kemmler, Mannfred defeated both the dwarfs and the elves in order to secure her.

Rumours began to spread about unusual activity in Sylvania, in particular a great darkness spreading across the land only letting in the smallest possible sun, covering the land in perpetual night. Concerned about this the Grand Theogonist Volkmar the Grim sent the Witch Hunter Gunther Stahlberg to investigate. When he failed to return, the old priest began to grow suspicious but his worries were not confirmed until two years later in 2522. Mannfred officially seceded Sylvania from the Empire, a message he delivered via the skinned corpse of Stahlberg, dumped into the Conclave of State, the yearly meeting of the electors. This message also served as a distraction while Mannfred's agents snuck into the Temple Vaults and stole the fabled Crown of Sorcery, the crown of Nagash. In response Volkmar swore to slay Mannfred and reclaim the crown.

Volkmar's crusade was treated as a tragic success, but in reality it was a failure. Not only was Mannfred never slain, nor the Crown returned to Altdorf, Volkmar himself disappeared at the end of the last battle. Victory was claimed due to the incredible intervention of the Supreme Patriarch Balthasar Gelt who concluded the campaign by creating a mystical wall of faith around the cursed province, trapping all undead inside. The threat of Mannfred had not been defeated, but it had been contained.

Mannfred was frustrated by this wall, but ironically pursued a similar plan himself. Using the divine and sainted blood of nine captured priests of various faiths (including Volkmar whom he had captured, the Fay Enchantress of Bretonnia, and his long-time captive the Everchild) Mannfred created a huge wall of bone around Sylvania, securing his boarders against outsiders. Between these two barriers, only the dead could enter Sylvania and nothing could get out.

However in 2523 the ancient liche and servant of Nagash, Arkhan the Black penetrated the barriers and entered Sylvania. After an initially tense first meeting, Mannfred and Arkhan allied with each other as each was pursuing the same goal - the resurrection of Nagash in order to defeat the most recent and greatest incursion of the Chaos gods. Between them they conceived a ritual using the Crown, the claw and the books that Mannfred had already collected (along with the 2 books Arkhan already had in his possession) that would bring Nagash back to the land of the living. However they still required three more artifacts; Nagash's staff, his armour and the foul Skaven sword the Fellblade, the very weapon that, centuries before, had been used to destroy Nagash and whose curse had ensured that every manifestation of Nagash since that time had been weaker than the last.

After Arkhan devised a ritual to help them escape Gelt's wall of Faith, Arkhan marched to Bretonnia to recover the staff and Mannfred traveled to the Border Princes to recover the Fellblade. He invaded the stronghold of Clan Mordkin, slaughtering the clan with the aid of a mighty skeletal dragon and claiming the blade. Returning to Sylvania, he and Arkhan (who had been equally successful) prepared to claim the final required artifact which was being kept at the nearby Imperial fortress of Heldenhame, home of the Knights of Sigmar's Blood. Working together the two undead lords breached the castle and recovered their prize.

By Geheimnisnacht 2524 everything was prepared and Mannfred and Arkhan rode with their hostages and artifacts to the stone circle known as the Nine Daemons to enact the rite. Mannfred had always planned to usurp the ritual at the key moment so that while Nagash would be restored he would be under Mannfred's control. This plan however was disrupted by the timely intervention of a High Elven army led by Eltharion the Grim tasked with rescuing the Everchild. Forced to confront this army Mannfred was unable to sabotage the ritual as he intended and while the elven army was defeated (with Mannfred himself destroying the legendary loremaster Belanaar and Arkhan slaying Eltharion) Nagash was returned to the world free and unfettered from Mannfred's control.

In payment for his part in his resurrection Nagash made Mannfred one of his new Dark Lords, called the Mortarchs. As the Mortarch of Night Mannfred was an instrumental (though not especially trusted) tool of the Great Necromancer. To his great dismay however Nagash brought back Mannfred's Sire, the great Vlad von Carstein, from the dead who immediately reclaimed Sylvania as his own.

Mannfred then lead one of three armies into the ancient dead land of Nehekhara when Nagash sought to reclaim the Black Pyramid in Khemri. Joining forces with Luthor Harkon, the pirate king of the Vampire Coast, Mannfred forced his way through to Khemri after the battle there had already begun. After Nagash's victory he accompanied his master back to Sylvania. For some time following this Mannfred remained in Sylvania with Nagash as the forces of Chaos ravaged the world.

Mannfred was present when the Nurglite invasion of Sylvania took place. Once again along with Harkon, Mannfred lead an army to repel the daemonic forces led by the traitorous Mortarch, The Nameless, and the possessed, cursed and insane Isabella von Carstein. Despite a few minor, early victories, Mannfred was overwhelmingly defeated by the forces of the plague lord when the mighty willpower of the Nameless ripped control of his zombies hordes from him. Forced to retreat to an abandoned coaching inn nearby called The Dead and Buried Mannfred and a small number of powerful vampire lords (including the Mortarchs Harkon and Vlad) made a desperate stand. Once again they were defeated, with all the vampires destroyed apart from Mannfred, who viciously betrayed Harkon to ensure his own escape.

The Nurgle forces continued on to the relocated Black Pyramid, a repository for Nagash's death magic. There they entered a huge battle with the great necromancer and were defeated. However the whole invasion had simply been a distraction. A skaven team led by Ikit Claw had tunneled into the pyramid and just as the battle outside reached it's conclusion they detonated a huge explosive device that destroyed it and scattered a large amount of Nagash's careful horded power. This loss forced Nagash to finally work with the other incarnates.

The incarnates had gathered their remaining forces in the wood land realm of Athel Loren. When Nagash's army arrived Mannfred was sent to parley with the assembled Council of Inarnates who against their better judgement reluctantly welcomed Nagash. Their price however was a high one. The sacrificed Everchild, long assumed to have been the daughter of the Phoenix King and the Everqueen had in fact the product of an illicit affair between the Everqueen and the Elven hero Tyrion. In payment for their acceptance of him, Nagash offered them the architect of the Everchild's murder. Believing his long-time rival Arkhan was about to be humbled at last, Mannfred was dismayed when Nagash instead offered Mannfred himself up as scapegoat, sacrificing a servant whose loyalty was questionable to say the least in order to protect a faithful one.

Traitor and the End of the World

Imprisoned in a cage of power sapping roots Mannfred was furious not only at this betrayal, but also to learn that Vlad had somehow survived the massacre at the Dead and Buried and, along with Arkhan, sat at their master's right hand. Therefore when he was visited by the first daemon prince Be'lakor, Mannfred had no problem with turning his back on the council and Nagash, revealing to Be'lakor information about the elven goddess Lileath in return for his freedom. Using Be'lakor failed attack on Lileath as a distraction, Mannfred fled Athel Loren to Middenheim; stronghold of Archaon.

Despite pledging his fealty to the Lord of the End Times Mannfred in truth had no loyalty to the servants of the dark gods, who treated him little better than Nagash had. Instead he was happy to simply let the incarnates and Archaon battle for the world, determined to pick up and rule the pieces afterwards. Of course he had no idea as to the true scope of Archaon's plan.

As the incarnates pooled their powers to prevent the world obliterating force Archaon had unleashed in the heart of the Faustschlag, Mannfred committed his final and greatest act of betrayal. Sneaking into the battlefield, Mannfred slew the incarnate of metal Balthasar Gelt by impaling him on his sword. Teclis, already burdened with the energy of the winds of fire and beasts, tried to harness the escaping wind but could not handle the titanic forces within his frame and was destroyed. With this last act of spite and pettiness, the final hope for the world was ended, though in its closing minutes Tyrion slew Mannfred, finally ending the life of the vampire count.

The rest of the world followed soon after.