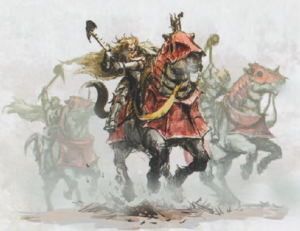 The Inner Circle of the White Wolf.

The Fellwolf Brotherhood were the barbaric and ferocious Inner Circle of the Knights of the White Wolf.

The majority of the Teutogen Guard were chosen from the ranks of the Order's Inner Circle.

During the End Times, Boris Todbringer had taken many Knights of the White Wolf with him upon his doomed hunt for Khazrak. However, the Fellwolf Brotherhood remained, and their determination to defend their city burned white hot. As the fighting had raged through Middenheim's streets, the Fellwolf Brotherhood performed one devastating charge after another. Often considered the most ill-disciplined of Middenheim's knights, the brotherhood's howling savagery now became their biggest asset, allowing them to match the reckless ferocity of the northlanders blow for blow.