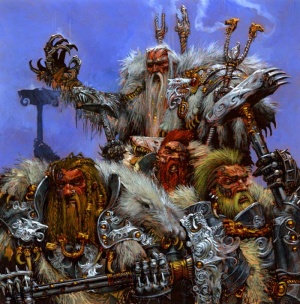 The Guard accompany him both at state occasions and on the battlefield. They are named after the great Teutogen Tribe, that in the time of Sigmar helped the man-god drive the Orc and Goblin invaders from the lands of men. However, unlike the Greatswords who are drawn from the State Troops, the Teutogen Guard are instead selected from the ranks of the Knights of the White Wolf by the orders Grand Master and the Ar-Ulric himself[2]. Unlike the rest of the order they fight on foot, but they still retain the order's iconic warhammers.[1][3a]

They are often members of the Order's Inner Circle, although the selection process takes account only of merit and not rank and ordinary brethren are just as likely to be chosen if they are worthy. Being selected for a tour of duty with the Teutogen Guard is one of the highest accolades that a Knight of the White Wolf can receive, and the warriors already fearsome resolve is strengthened still further by the weight of the honour and duty he bears.[2][3a]

The Brotherhood of the Axe

The Brotherhood of the Axe is an elite military order within the already elite Teutogen Guard. Only the most devoted and warlike followers of Ulric are admitted into the Brotherhood.[1]

Although they are now technically subordinate to the Teutogen Guard, the Brotherhood’s origins go back to the days before Sigmar, when the Teutogens were the most powerful tribe in what is now the northern part of the Empire. They were an elite warrior society made up of the very finest Teutogen warriors. When Sigmar united the tribes and founded the Empire, the Brotherhood of the Axe retained their original role as protectors of the Teutogen chiefs. Only warriors of pure Teutogen blood are admitted to the Brotherhood, and they must also be warriors of proven skill and unquestioning loyalty to Ulric.[1]

Most of the Brotherhood are anti-Sigmarite, and because of this the order is regarded with suspicion by the Imperial authorities. However, their prowess on the battlefield is unquestioned, and they are widely admired in Middenheim.[1]