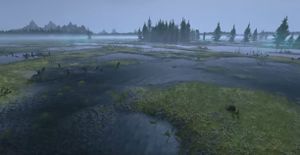 Hel Fenn is a marshy region of Sylvania.

Second in infamy only to Castle Drakenhof, Hel Fenn is the centre of Zombie activity in Sylvania.

In ages past, the tribes of men who scratched a living from these lands used to bury their dead in this swampland, located in the east of Sylvania. When the great warpstone showers came, Hel Fenn boiled, churned and fumed, and spewed forth a multitude of dead from centuries past. Rotted corpses draped in mud and weeds erupted from the thrashing mire and engulfed entire villages.

The Battle of Hel Fenn

It was to Hel Fenn that Mannfred von Carstein finally retreated when his campaign against the Empire failed. In the middle of the blighted marshland, he turned at bay to confront his pursuers. Even as the Imperial army trudged through the mire, grasping hands from the chill waters dragged soldiers to their doom, while at night sentries were lured to their deaths by flickering ghost lights. Fully a quarter of the Empire's army died in Hel Fenn before they even saw battle. Nearly as many deserted on the hideous march in pursuit of the Vampire Count as former comrades returned in the darkness to attack the camps. Even after Mannfred's defeat, the marshes took a heavy toll. Trapped by the Dark Magic unleashed in the battle, these poor souls still wander the marshes as stumbling Zombies. These foul creatures remain to be harvested like rotten fruit, and so Hel Fenn remains a haunt of Vampires and Necromancers seeking to control the Undead hordes of the swamps.