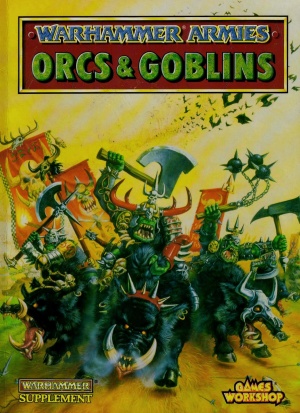 The Orcs and Goblins Armybook is an expansion book for the Games Workshop Table Top game of Warhammer. This book was published for the first time in 1993, and is for the 4th edition of Warhammer, and was used for 5th edition as well. The book has 120 pages and the cover is printed in color while the majority of the book remained in black and white, although there are several pages of colour images of miniatures.

This book contains a complete army list for using a Orc and Goblin army. Further special rules, equipment as well as some appendix army lists are included.

This book contains background information and fiction on:

This book contains background and special character rules for: