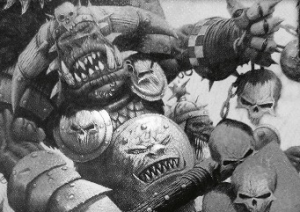 Oglok the 'Orrible was a massive Orc Big Boss who acted as the great Warboss, Morglum Necksnapper's second in command.

Oglok's tribe lives in the Badlands and was defeated by Morglum Necksnapper's Black Orcs. Oglok was so overawed by the Black Orc leader that he decided to throw in his lot with Morglum. Since then he has fought in many battles alongside the Black Orcs, leading his Orc Boar Boyz against the Bretonnians at the Battle of Death Pass and against the Dwarfs of King Kazador at Karak Azul. Oglok is a gnarled old Orc whose craggy head bears the scars of many years fighting. His powers of leadership are second only to Morglum himself.