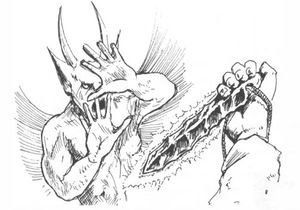 Dawnstones are ancient magical weapons sometimes found in Barrows. [1a]

Flint or obsidian cared into the form of either daggers or hand axes they are much more resilient than normal artefacts and have a powerful magical aura. As well as acting as a magical weapon they do not allow Daemons, Elementals or the Undead near them and prevent them using their magical abilities against the bearer. [1a]

Some have holes bored into them to allow a cord to be threaded through it so they can be worn around the neck. [1a]

Rarely Barrows have a circle of such stones which contain and constrain a Daemon or other powerful entity. [1a]