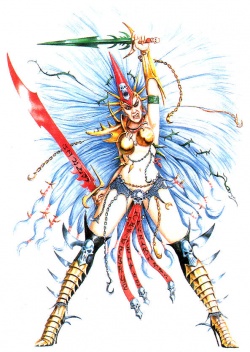 Each of the cities of the Druchii has a great temple to Khaine which require a tithe from its rulers and raiders that the city sends out across the world, from the haul of the corsairs is taken one slave in ten as a sacrifice to the brides. These dangerous maidens often have a forbidden allure for others of their race who endeavour to gain their favour, and often die to do so for their god is a jealous husband and does not share. [2a]

One night each year is set aside for the cult, the Witch Elves roam their cites, dragging out citizens and slaves alike from homes - they then sacrifice hundreds of them in a great holy feast drinking blood and wine and the raw flesh of their victims. [1a]) Households that survive unscathed often sacrifice a slave or elderly relative to the god of murder in thanks. [1b]

Witch Elves live in the Temples to Khaine, monitored by the Hag Queens. [1b]

In the 2nd Edition, Dark Elf Assassins were the children of Witch Elves who if they survived being immersed in a cauldron of Khaine would become an adept of the Temple, trained in the arts of disguise and murder. [6a]