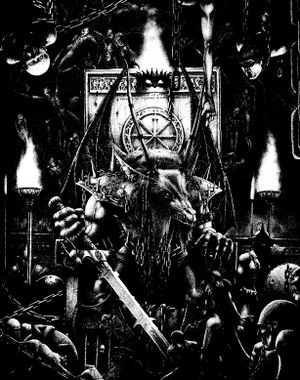 A Lesser Power of Chaos is either a Nascent Power or an Independent Daemon. [1a]

Whilst the great powers of the Realm of Chaos - Khorne, Nurgle, Slaanesh and Tzeentch are well known, there are also many smaller, sometimes linked entities. [1a]

Where the Great Powers can be described as vast vortices of energy, these smaller whirlpools spin around them, converging and dividing, growing and devouring one another. [1a]

Whereas all Daemons of the Great Powers may be reclaimed and absorbed by their patron, some daemons remain independent becoming tiny conscious energy whirlpools. Most were once mortal having ascended to become a Daemon Prince, with their followers who lived with them worshipping them. Sometimes small groups of souls, often having suffered a horrific death, merge to become a tiny energy vortex or Daemon. Finally, some daemons may be merely creatures of the realm itself.

As souls enter the Realm of Chaos, most become part of the Great Powers but some coalesce to begin the process of creating a smaller, less potent power. These can be thought to be asleep, dreaming and are only vaguely aware of the material world. These nascent powers can still create lesser daemons, off shoots of the dreaming mind or born during moments of relative coherence. They may then seek to further the interests of their creator and patron, seeking to feed and perhaps eventually awaken them. [1a]