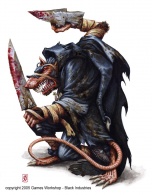 You may be searching for Dark Elf Assassins or Skaven assassins.

Assassins are usually professional contract killers, while murderers usually act because of their own personal reasons. Presumably nearly all civilized societies of the Warhammer world harbour such individuals, mainly hired by unscrupulous individuals to remove anyone who gets in the way of their ambitions, be it personal enemies, political and/or economic rivals or to obtain revenge. In most societies this is forbidden, and if caught assassins and their employers are punished by law.

However assassination is an acceptable action in Dark Elf and Skaven societies and not forbidden by the respective authorities. Inside these two societies assassins are frequently employed by those in charge of the government and by anyone wealthy enough to pay the required price.