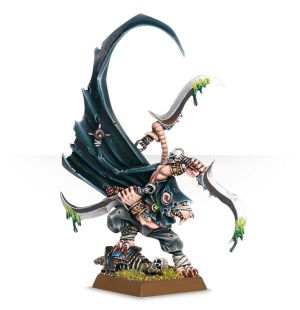 Deathmaster Snikch is regarded as the best Assassin of Clan Eshin. [1a]

He is the prime agent of Nightlord Sneek, the clan lord of Clan Eshin who ensures that no-one is sure about his whereabouts. He often leaves his distinctive symbol besides the heads of his victims, traced in blood, but only when his master orders. Other victims are attributed to him but are not certain including the Celestial Wizard Heinrich Frisen and the entire household of Frederick Hasselhoffen. [1a]

He carries three Weeping Blades, holding one by his tail and each of which is more powerful than a normal blade of its type. He also wears the Bands of Power which allows him to boost his strength immensely and the Cloak of Shadows to assist his already formidable stealth. [1a]