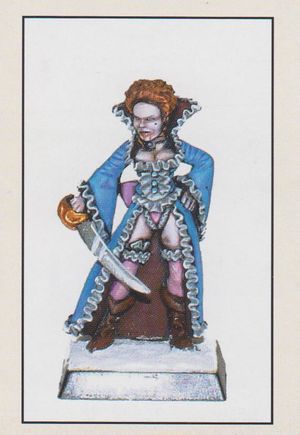 The Model of Marianna Chevaux produced for the Mordheim game.

Marianna Chevaux is a thief and assassin who was transformed into a vampire by Serutat, one of Neferata's Lahmian sisterhood and who could be found in City of the Damned, Mordheim. [1]

Marianna was usually seen dressed as a young noblewoman, favouring Bretonnian silk dresses that flattered her figure and could serve to distract her opponents. She had long red hair that she often wore in a formal style to match her dress, although on occasion she dressed as a male youth if that served her purposes better. [1]

A successful assassin and thief, she was, around the year 1700 (Imperial Calendar) employed to steal a magical gem, the Noctu from the crypt of the vampire Serutat in Araby. Although initially successful, she was pursued by the vampire who transformed her into one of her kind, but surprisingly she did not take the jewel from her. [1]

As a new born blood-drinker she cut a swathe through suitors, soldiers and courtesans alike before she fled to the dubious safety of the city of Mordheim following its devastation. Whilst there she captured and tortured any who might reveal to her the secrets of the Noctu, which she was eventually able to unlock. [1]

She generated a reputation as a vampire–slayer as well as an assassin for hire, in the latter role she continued to use the alias the Black Orchid, even leaving the flowers at important kills. [1]

As well as being a vampire, Marianna was a highly skilled combatant, favouring a rapier and dagger in combination as well as a crossbow pistol and throwing knives. Often her weapons were coated in garlic essence which was a highly effective poison against some vampires. [1]

The Noctu gem could be used to create shadows to hide its bearer and she intended to use it to gain vengeance on Serutat. [1]