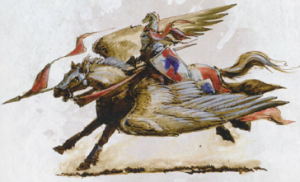 A member of the Skyhost.

The Skyhost was an elite band of eighty Pegasus Knights who fought during the End Times, led by the former Royarch, Louen Leoncoeur.

The Fall of Altdorf

When the Bretonnians rode to war, they filled the sky as well as the lands with the majesty of their approach. High Paladin Louen Leoncoeur rode his hippogryph at the head of a wedge of eighty Pegasus Knights, many of them promoted from Parravon’s finest sky-jousts or Couronne’s famous Tournament Celestial. Each of the knights rode tall in the saddle of his winged horse, fearlessly plunging towards the storm that raged above Altdorf. They brought doom for those monstrous warriors who had trespassed on the realms of civilised man, for their sagas would come to an end on the tip of a lance.

The Battle of the Temple of Shallya

Though his diving strikes had reaped a high tally of champions from the Norscan host, Louen Leoncoeur realised that the otherworldly danger assailing Altdorf from within was worse than the earthly forces outside its walls. He had spied a small zone of sanctity in the poor district of Altdorf, and led his pegasus knights to defend that last pocket of purity, hoping that by keeping it from Nurgle’s clutches he had a chance of reclaiming the city.