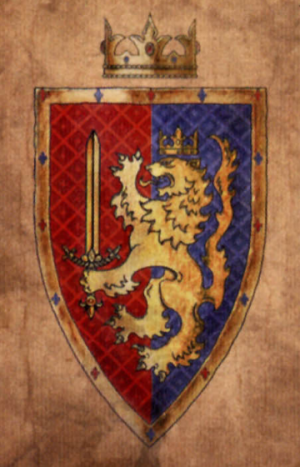 The Dukedom of Couronne is a founding Dukedom that lies upon the northern shores of Bretonnia and is the current seat of power of the king's Royal Court. Even in comparison to all the other Dukedoms, the land of Couronne is said to contain some of the greatest horsemen within all of the realms. Such a boast should not be taken lightly, especially within a kingdom such as Bretonnia but it is common knowledge that the people of Couronne are severely obsessed with horses and horsemanship.

From high nobles to lowly peasants, almost everyone in Couronne has ridden a horse in their life-time, and some boast that their children learn how to ride one before they even know how to walk. In fact, the Couronnian obsession makes horse breeding and horse racing very important elements of their culture, and even their politics. Plots to undermine a rival’s horses are commonplace and feuds arising from them are a major feature. Such obsessions with horses has only made the Knights of Couronne all the more valorous in their deeds, with the Duke being none other than Louen Leoncoeur himself, the current Royarch of all Bretonnia.

Couronne is one of the larger dukedoms and unique in possessing a significant internal division. Couronne proper sits north of the River Sannez, around a cape projecting into the Sea of Chaos. The Marches of Couronne extend to the east, reaching around the Grey Mountains until they end at the ill-defined border of the Wasteland. Couronne proper is mostly arable land with pastoral land in the south and east where it approaches the Pale Sisters and the Grey Mountains. Its coast is rugged and ill suited to trade, and it’s constantly lashed by storms coming in off the Sea of Chaos. It is also subject to frequent raids by Norsemen, both servants of Chaos and simple bloodthirsty barbarians. Coastal villages are always protected by a stockade at the very least; those without even basic defences do not last a single raiding season.

The Marches of Couronne include the northernmost reaches of the Grey Mountains and wide expanses of plains that are too dry for most crops. As a result, the people of the Marches have become the greatest horse-breeders in Bretonnia, which is no mean feat given the quality achieved elsewhere. The Marches are plagued by Greenskins from the Grey Mountains who also raid into the south-eastern portions of Couronne proper. These Orcs ride strange carnivorous horses which seem to be able to gallop up mountains as well as across plains. The Couronners do not know where the creatures have come from, and all attempts to capture, break, and breed them have failed dismally.

Despite rumours to the contrary, Couronnians are not born in the saddle. A few women have tried, but it is apparently physically impossible. They are, however, introduced to riding before they can walk and continue to practice their whole lives. Couronnians are without question the finest horsemen in Bretonnia. What is more, almost all of them are deeply knowledgeable about and interested in equine creatures. For many Couronnians, their best friend is a horse. It is said a Brionnian would fight you to the death over his wife but cheerfully lend you his horse, whilst Couronnians are the other way around. This is not true though for Brionnian knights do not lend their horses to anyone.

Couronnians hate to walk anywhere when they could ride. This even extends to peasants; horse breeding means most peasants have the use of a horse, even if they do not technically own it. Most Couronnians want the best horse possible, and it is not at all unusual to see a dainty noble lady riding a destrier. They claim being on such a big horse makes them feel safe, and they might occasionally need to ride on a battlefield. However, they normally just ride them to market and back, even when the market is at the castle gates. Some Couronnians start to feel that using a horse simply to get between home and market is something of an insult, and thus leave to become adventurers. Knights Errant, of course, want to show off their horsemanship.

However, many Couronnian adventurers hate horses, or are even allergic to them. Completely unable to fit in at home, they head out to meet people who are not completely horse-mad. The Couronnian obsession makes horse breeding and horse racing very important elements of their culture, and even their politics. Plots to undermine a rival’s horses are commonplace and feuds arising from them are a major feature. The summer cycle of major horseraces gives structure to the courtly calendar, and even the King attends most races. Unlike many Couronnians, however, King Louen Leoncoeur feels that his duties as a ruler are more important than watching a dozen horses run very quickly.

Politics within Couronne are mostly concerned with petty feuding about horses. The main exception concerns the March of Couronne. Earl Adalbert, lord of the March, is a vassal of the Duke. He would much rather be a direct vassal of the King. As the two men are currently the same person, he feels that now is an excellent time to press his case. The King, however, is wary of giving such a powerful lord the independence of a Duke. The Earl’s political manoeuvrings are proceeding on two fronts. First, he tries to portray all the other non-ducal Barons of the realm in the best possible light.

If they can be seen to be righting wrongs committed by a Duke, so much the better. Second, he aims to perform acts so glorious that the King will have little choice but to accept his fealty as the King. In the service of both goals, he has great need of adventurers who are willing to do a lot of work for none of the glory. The Earl is also pressing for glorious military adventures against the Wasteland. If he could capture Marienburg, he is sure that he would be made a Baron.

In 2418 IC, the city of Couronne was besieged by a great horde of Beastmen and recieved unexpected aid from a High Elf army commanded by Imrik of Caledor who even fought alongside King Charlin. [3a]