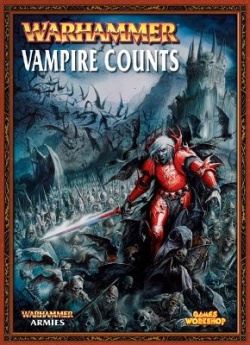 An overview of the Undead, in particular Vampires. Information on the creation of the Vampires by Nagash and Neferata and the Wars of the Vampire Counts. There are two maps, one of Sylvania and a less detailed one of a larger area of the Empire, including the locations of many of the battles fought by Vlad, Konrad and Mannfred von Carstein. There is information on the land of Sylvania and some of its main features. The section concludes with information about some other infamous vampires including the Master of Shadows, the Necrarch Vampires, the Red Duke, the Black Prince, the Krudenwald Fiend and Neferata, Queen of Mysteries and a timeline of the Vampires.

The various abilities and powers that are available to Vampire characters in games of Warhammer.

All of the Magic Items available to characters in a Vampire Counts army.

The complete army list for creating a Vampire Counts army for games of Warhammer.

During the production of this book, the following people were involved considerably.