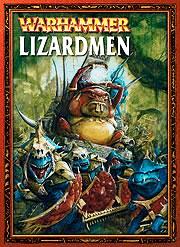 Warhammer Armies: Lizardmen is an Army Book for Lizardmen armies in Warhammer Fantasy Battles. It was first published in 2003 and is for the 6th Edition of Warhammer.

Background and rules for the units and characters in a Lizardmen army.

Rules for the five generations of the Slann and the Drain Magic spell.

Treasures of the Lost World

Background and drawings of Lizardmen weapons and armour.

Tactics of the Old Ones

Background for Saurian, the language of the Lizardmen. A list of some words, with pronunciation and meaning. A list of Lizardmen phonetic glyphs and numerals.

During the production of the book, the following people were involved considerably.