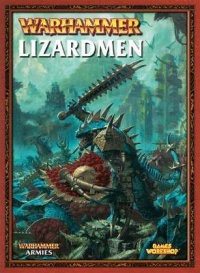 The cover of the current Warhammer Armies: Lizardmen

The Warhammer Armies: Lizardmen is an expansion book for the Games Workshop Table Top game Warhammer. This book was published in February 2009, and is for the 7th edition of Warhammer.

The book has 104 pages (including reference page and contents). The cover image is printed in colour while the majority of the book remains in black and white, although photographs of the models, 12 pages of hobby information and painting examples are in colour.

This book contains a complete army list for using a Lizardman army. Further special rules, equipment as well as Characters is included.

This book contains background information and fiction on most apsects of the Lizardman culture, including the Great Catastrophe, The Age of Isolation and "The Rat and the Serpent"

This book contains background and special character rules for: