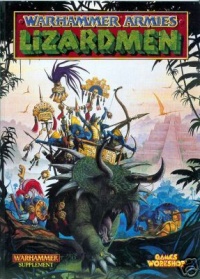 The cover of Warhammer Armies: Lizardmen, designed by David Gallagher.

Warhammer Armies: Lizardmen is an Army Book for Lizardmen armies in Warhammer Fantasy Battles. It was first published in 1997 and reprinted with corrections in 1999. It for the 5th Edition of Warhammer.

This section contains the background and history of the Lizardman race. It also contains background on Lustria and the Southlands. There are also the accounts of the Arabyan merchant and scholar Ibn Jellaba and the Cathayan captain Yin-Tuan.

16 pages of colour pictures of Lizardmen miniatures to inspire hobbyists to create their own Lizardmen army. There is also a table explaining how to show different Marks of the Gods.

A timeline of the Lizardman race from the time of the Old Ones to 2100 IC, when opposing Lizardman factions clashed over the possession of the mummified remains of Lord Xhilipepa. There is also Marco Colombo's account of his adventures in Lustria.

Background and special rules for the different units, characters and monsters in the Lizardmen army.

The Chronicle of Itza

The Chronicle of Itza, as translated by the Estalian wizard Mendoza for the Bretonnian Duke of Brionne.

The complete army list for using a Lizardmen army in games of Warhammer.

Information on the Warhammer miniatures range, including all the different Army Books and some of the Lizardmen miniatures available.

Raising the army of Rezephua

How Nigel Stillman went about collecting his Lizardman army.

These are the people mentioned in Warhammer Armies: Lizardmen as having contributed to the book.