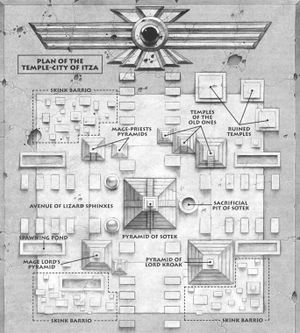 Map of the City

Itza, The First City is the oldest Temple-City of the Lizardmen. [3b]

The city was planned according to alignments of the twin moons. [1b]

A sprawling city whose skies are filled with Terradon Riders carrying messages or even dignitary's from other cities and whose streets and districts are full of bustling skinks. [3b]

The Old Ones dwell in the location that later Itza will occupy and bring forth the Slann of the First Spawning who measure the lines of the city. The Second Spawning are formed to adjust the alignment of the world and Saurus are created to build the city. Skinks and Kroxigor join them in the work and the city is completed around -10,000 IC. [1d]

During the Great Catastrophe the city was ravaged by the forces of Chaos and was only saved through the sacrifice made by the Venerable Lord Kroak, the renowned Slann Mage-Priest. Summoning the Deliverance of Itza, he banished every daemon in the city, but in doing so seared all other spells from his mind. The Kroxigor Nakai, known as the the Wanderer had also journed to Itza to assist in its defence. [2a]

There is a dispute between Lord Itz-Xloc and Quex which confuses the skinks of the city until the great pyramid of the Old Ones falls and the hidden plaque of Otzli-Potec is found. [1d]

After the Skaven of Clan Pestilens are driven from Lustria in around 100 IC, a great Pyramid to Sotek is constructed in the city and 10,000 skaven sacrificed upon its alter. [1d]

After Dark Elves steal the Star Stela of Quetli in 315 IC[3b], Mage Priest Tepec-Inzi wakes from a trance, raises an army and transports it to the Ashen Coast in time to intercept the raiders emerging from the Black Way. His war leader, Gor-Rok retrieves the stella after tearing out the enemy commanders throat. [3a]

The first of the twin tailed Skink Oracles are spawned in Itza in 535 IC. [3b]

Since the arrival of the mad Vampire Luthor Harkon in 876 IC[1c], his conquest of the Vampire Coast and raids on nearby Temple-cities, Lord Xltloc has dispatched many armies to try and destroy him and reclaim the sacred artefacts stolen from them. [1a]

In 930 IC Lord Xltep defeats an army of Harkon attempting to move inland. [1a]