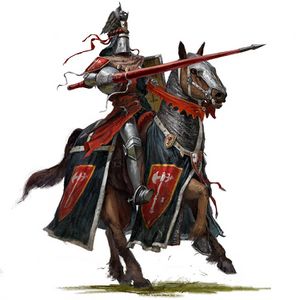 The dukedom of Brionne is situated on the south-western coast of Bretonnia.

It is bordered by its fellow provinces of Aquitaine, Quenelles and Carcassonne and by the foreign realm of Estalia. Its current Duke is the burly and ferocious Theodoric.

The political centre of the province is the port and town of Brionne which was built upon the ruins of a High Elf settlement. [3a] The Duc of Brionne is tasked with the protection of the coastline and of the Estalian border. Therefore, besides fielding an adequate host of knights he also maintains a fleet of warships.

The city is built atop the ruined foundations of the High Elf city of Athel Maraya which was destroyed in the War of the Beard. [5a]

After Cuileux is overun and destroyed by greenskins in 930 IC, the knights of Brionne and Quenelles ride forth to wipe out the enemy and lay claim to the land. Single combat between the two lords results in the death of the Lord of Brionne. [4a]

Balduin becomes lord of Brionne and in 932 IC leads his cavalry to a victory over the Orcs. [4a]

As the Red Pox assails the land, the Skaven besiege the city in 1813 IC - the invaders are crushed by an army led by Duke Merovech, the Duke of Parravon and the elves of Athel Loren. [4a]

A large flock of Ripperdactyls was swept far from the Southlands by a huricane and attacked the people of the city, killing hundreds of peasents and even knights that tried to fight them before they were driven away by Pegasus Knights. [2]

The Governor and leading merchants of the city of Brionne are known to make handsome profits by laundering the goods stolen by wrecking and piracy and it's an open secret in the city that some of Marienburg's merchant houses are active, if clandestine, partner. Slavery is also said to be flourishing secretly in the the Thieves City. [1a]