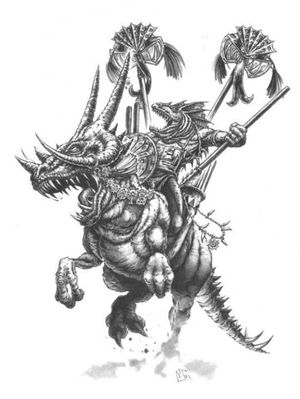 He patrols the rain forest and tracts of sisel and pampas grass. [1a]

He was one of the most persistent attackers of the new Norse colony of Skeggi leading from Hexoatl. Whilst his Cold One Riders led attacks across the beaches, forcing the defenders into a shield wall, he sent skinks on foot to damage the longships to prevent their raids up and down the coast. [1a]

Inxi-Huinzi defeated the Norse at the Battle of the Piranha Swamps recovering the stolen idols of Zlaxhutec. [1a]

Inxi-Huinzi carries many poisoned tipped darts, using toxins taken from fish-lizards of the Lustrian swarms. [1a]