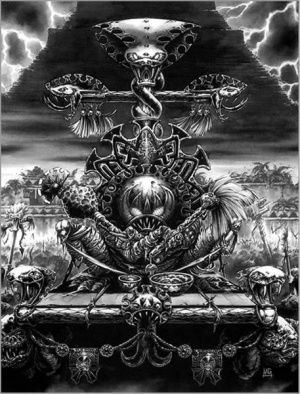 The Venerable Lord Kroak is a long-dead and mummified Slann[1a][2] of the First City, Itza.

Plaques recording the history of the Slann relate that Lord Kroak was present at the birth of the world and therefore fated to be present at its end. Offerings and prayers are devoted to this venerable Slann, and all who look into his inlaid eyes can sense the power still residing there. [1a]

As the most venerated Relic-Priest, he has accompanied many Lizardmen armies and each year he greets the rising of sun on the first day of the new year. [4b]

Lord Kroak is said to have been the first Slann that was spawned in the world, the most powerful of the First Spawning and the most revered of all the Relic Priests. [2a] He was taught by the Old Ones, with the secrets of unwinding time unveiled by Potec and how to use the Winds of Magic by Tepok. [3a]

An integral part of the Old Ones' Great Plan, his spirit stubbornly refused to leave this plane of existence, even after his body was slain by a score of Greater Daemons during the defence of Itza, the first temple-city. [2a]

The body was retrieved and returned to its resting place in Itza, sheathed in gold and holy bindings. It has been carried into battle many times, humbling all those in his presence. When at peace, many offerings are made to him as they are to Sotek and the other Old Ones. [2a]

The spirit of Lord Kroak can use his immensely powerful telepathy to cast spells through willing supplicants. [2a][4b] For a Skink Priest this is a experience of holy significance and a great honour. [2a]

A huge structure in Itza is the home of his mummified body and on signifcant occasions his body is moved to the temple atop the pyramid so his spirit can view the domains of his lost masters. Brightly painted sculptures describing his life and battles decorate the structure. [4a]

Amongst his students was Lord Mazdamundi. [3b]

In 5th edition Lord Kroak could no longer cast spells himself but other living Mage priests could do so via telepathy. [1a]