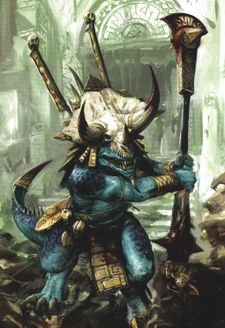 He is the last surviving member of his spawning and is the eldest of the city's Temple Guard. He sees the protection of the city's Mage Priests as his sacred duty to the Old Ones. Chakax has maintained his guard for centuries and his skills as an Eternity Warden have been proved many times, as not a single Slann under his protection has fallen to an enemy's blade. [1b]

He accompanied Lord Tenuchli when he led an army to confront the Daemon Slaa'Ulaan, steadfastly guarding the Slann as the battle began. The corrupted Pillars of Unseen Constellations sapped the strength and speed of the other Saurus with Slaa'Ulaan slaughtering them until only Chakax and Tenuchli were left. However as Slaa'Ulaan stepped forward to claim the Slann, Chakax exploded into action and pulped the Daemon.[1a]

As it expired, the fading daemon managed a last bolt of energy but Chakax stepped into its path, saving his lord from death. With no further orders, he was unable to leave his side and stood guard until a patrol found them a cycle of the moon later. [1a]

Chakax wields the Star-Stone Mace which was crafted before the founding of the first temple city. He also wears the Helm of the Prime Guardian that is said to have been worn by the first of the Temple Guards.[1b]