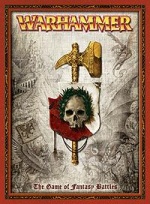 The Warhammer Rulebook (7th Edition) contains all of the rules required to play the 7th Edition of Warhammer Fantasy Battles. It is a 274 page hard back book and was first printed in 2006. A smaller version of the rulebook was also released at the same time as part of the Battle for Skull Pass boxed set.

All of the rules for units, movement, shooting and close combat needed in the 7th Edition of Warhammer.

A brief overview of the background of the Warhammer World. It starts with a look at the history of the world, from the time of the Old Ones to the Storm of Chaos. There is then a look at each Warhammer army, its background and a selection of miniatures painted by the 'Eavy Metal Team. This section also contains a map of the entire Warhammer World.

Information on getting started with the hobby, painting, building terrain and different ways to play the game.

During the production of this book, the following people were involved considerably: