From Warhammer - The Old World - Lexicanum
(Redirected from Daemons of Chaos)
Jump to: navigation, search 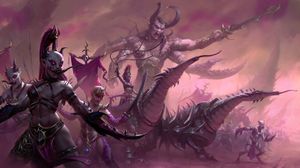 Daemons are immortal beings of raw Chaos, who dwell in the Realm of Chaos. Most Daemons serve the Chaos Gods. [1a]

In appearance a Deamon reflects its creator god and master. [1a]

Whilst mortals may be unaware what a Daemon actually looks like, what they are or where they come from they may know myths and stories about them. The subconscious learns and informs how manifestations from the Realm of Chaos takes shape which then reinforces that image by those unfortunate enough to witness them so a a Bloodletter looks the way it does because people believe it should look like that, their subconscious, filled with abject terror, further underpins the Daemon’s perceived form. [7a]

The daemonic armies of the dark gods can range from a few packs of lesser daemons to vast hordes that can blacken the horizon and are led by colossal avatars of their gods - the Greater Daemons. Some hosts are made up of Daemons loyal to a single god whilst others are composed of those neverborn that have, tempoarily put aside their unending rivalries to make war on others. This combination of normally opposing powers can be alomst invincible as long as the magic that sustains them lasts. [1a]

All daemons have a true name, usually a large number of guttural syllables and which they take care to keep secret with only a few of the most powerful Greater Daemons not hiding their true name. Instead most Dameons use titles or false names reflecting their nature or even on occasion adopting a name given to them by others. The Lords of Change alter their names more than any others each having perhaps hundred or more titles and names at any one time, often sharing them with others. [1b]

They are all warlike fragments of divine will, let loose upon the world. Blasphemous abominations as they are, they draw raw power from the very Gods themselves who gave them life, and are the ruination of civilisation. Unbound to mortal concepts, such as space and time, they exist only to tear civilisations asunder and plunge the world into complete and utter chaos. [1a]

They have no need for rest or conventional nourishment and do not suffer from fear, loss or doubt. A Daemon can not be truly slain only banished back to the Realm of Chaos. Often a Daemon that has been flung back to the immaterial planes it will seek vengeance on the mortal or immortal that has so inconvenienced it. [1a]

Magic sustains them in the mortal world and they are extremely vulnerable to its ebbs and flow. [1a]

The gods of Chaos constantly war with each for control of everything there is and this endless churning of energies within the Realm of Chaos sustains and creates Daemons. [1a]

Many types of Daemons are known to exist. The following list provides these Daemons, showing their alignment and what purpose they serve to their masters:

There are certain types of Daemons that are reasonably similar to one another but can serve any one of the gods such as Daemonic Heralds[3d] and Daemon Princes. The latter of the two is the only type of Daemon that can worship the Chaos pantheon as a whole, and/or have the ability to choose a god to follow themselves.[1]

Other Daemons are known to exist that are aligned to other gods, such as the K'daai for Hashut[5], the Vermin Lord for the Horned Rat[6] or completely unaligned to any one specific god such as Furies.[1]