From Warhammer - The Old World - Lexicanum
(Redirected from Dragonslayer)
Jump to: navigation, search 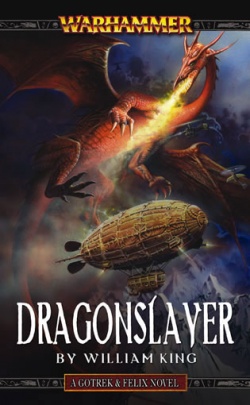 This article is about the novel by William King. For the Slayer type, see Dwarf Slayer.

Dragonslayer is the fourth novel in the Gotrek & Felix (novel series) by William King.

Gotrek and Felix head back towards the Empire aboard the arcane dwarf airship Spirit of Grungni. Tired and wounded from their adventures in the Chaos Wastes, the intrepid duo look forward to seeing friendly lands once more. But darker forces are at work and when a violent storm blows them into the World's Edge Mountains they disturb a deadly creature of legend which guards a vast golden hoard. With an army of rampaging orcs behind and a wrathful dragon ahead, things look bleak for Gotrek and Felix!

Dragonslayer begins a few days after the events of Daemonslayer, with Gotrek, Felix, Snorri Nosebiter, Borek, Varek, Malakai Makaisson and the survivors of Karak Dum flying out of the Chaos Wastes in the Spirit of Grungni. They pass over an enormous Chaos army marching southwards towards the Empire and resolve to warn the world of the impending invasion, but upon reaching Ivan Straghov's manor they find their refuge captured by a force of Clan Moulder skaven led by Grey Seer Thanquol, who has negotiated for Clan Moulder's support in his plan to capture the Spirit of Grungni and imprisoned Ivan, Ulrika and Maximillian Schreiber after a battle. Thanquol's ambush goes awry when Ulrika kicks him in the groin whilst he is interrogating her and his pained cry is mistaken for the attack signal. Gotrek, Felix and Snorri hold the skaven off from atop the mooring tower whilst Ulrika breaks free and rescues her father, Max and the other prisoners. Utilising large amounts of warpstone, Thanquol casts a spell that holds the Spirit of Grungni in place and snatches Lurk Snitchtongue from the air as he attempts to jump off the airship, but the tide turns against the ratmen when the Spirit of Grungnis gyrocopters start decimating their ranks with bombs. Max is able to dispell Thanquol's enchantment, freeing the airship, and the freed prisoners burst out of the manor to attack the skaven in the rear, routing them. Gotrek and Snorri kill Boneripper III and Thanquol flees. Peace temporarily restored, the survivors of the Karak Dum expedition are hailed and Felix reunites with Ulrika, but all soon make plans to depart in the face of the approaching Chaos army. Felix and the dwarfs take the airship south to return the Hammer of Firebeard to the dwarfen realms, and Ivan sends Ulrika and two bodyguards, Oleg and Standa, with them to warn the Ice Queen of Kislev about the invasion. Max also joins them with the intention of returning to Middenheim.

Whilst heading south, the Spirit of Grungni is overtaken by a storm from the Chaos Wastes and blown off-course into the World's Edge Mountains. Crashing against a mountainside, it is attacked by a huge Chaos dragon, Skjalandir. The dragon's presence activates the magic within Felix's sword, Karaghul, which drives him slay the dragon and protects him, Gotrek and Snorri from a blast of its fire. All efforts to hurt the dragon prove futile until Varek sacrifices himself by flying a gyrocopter into the beast's flank, carving into flesh with the rotor blades before detonating the gyrocopter's explosive payload. Badly wounded, Skjalandir retreats.

With the airship badly damaged its passengers are forced to stop for repairs at Karak Kadrin, the Slayer Keep. The dwarfen populace celebrate the return of Firebeard's hammer and the Karak Dum survivors, whilst the Slayers plan a quest to slay Skjalandir, whose reawakening has stirred up the local Orc tribes led by the ferocious Ugrek Manflayer. Felix and Ulrika's relationship becomes rocky thanks to their differing duties and inexperience with love, while Max harbours feelings for Ulrika as well. Ulrika decides to try and reach the Ice Queen on foot while Felix is honour-bound to accompany Gotrek on the quest to slay the dragon, but their paths lie together for a time. Eventually the group departs, having been joined by four new Slayers from the city: Steg, a former locksmith and gold-obsessed thief; Bjorni Bjornisson, a lewd, ugly lout; Ulli Ullisson, a young dwarf whose boasts to cover his cowardice; and Grimme, who is near-silent. Passing through the village of Gelt, the group learn that a bandit leader named Henrik Richter has been recruiting men driven from their homes by the dragon and now has an army. The travelers attacked by an Orc & Goblin warband on the mountain road but drive them off through a combination of the Slayers' ferocity, Max's magic and the exotic weapons Malakai has crafted to slay the dragon. Realising that the group are after the dragon, the surviving Orcs report back to Ugrek and suggest shadowing them to profit from the outcome. Meanwhile, Thanquol and Lurk traverse the grass plains of Kislev on foot and are captured by Chaos Warriors, who take them to the leader of the invasion force, Arek Daemonclaw, and his two advisors, twin sorcerers Lhoigor Goldenrod and Kelmain Blackstaff. Thanquol negotiates an alliance and the Chaos forces deliver him and Lurk to Hell Pit, stronghold of Clan Moulder, who imprison them.

Travelling deeper into the mountains, the humans and Slayers encounter villages destroyed by Skjalandir and after admitting that she loves Felix, Ulrika decides to follow him to slay the dragon. The group encounter a travelling minstrel named Johan Gatz whom Felix mistrusts, for good reason as Gatz is a spy who reports back to Henrik Richter and suggests the bandit leader shadow the group to the dragon's lair. The party reach the dragon's mountain, where Steg and Ulli prove too cowardly to enter but change their minds when Ugrek leads his Orcs into the valley. The party find Skjalandir in his lair and attack, bar Steg who becomes distracted by the beast's horded gold. Steg is crushed when the dragon falls on him and Grimme is incinerated by its fire, but empowered by his sword Felix manages to slay the dragon, driving Karaghul into its brain before almost drowning when Skjalandir's death throes hurl him under a waterfall. The party return to the surface to find the Orcs and bandits readying for a pitched battle, both sides having followed the group to the dragon's valley. Battle breaks out when Gotrek bellows that the dragon is dead, and the party are forced to defend themselves from waves of Orcs who break off to attack them. Standa and Oleg are killed and both Bjorni and Felix take bad wounds, but Gotrek manages to kill Ugrek and the battle ends in a rout for both sides when the Spirit of Grungni arrives freshly repaired and upgraded and bombs the battlefield, rescuing the heroes. Unfortunately, the dragon's treasure is lost when blasting powder Malakai and Ulli set up is accidentally triggered and the tunnel collapses, burying the treasure beneath tonnes of rubble.