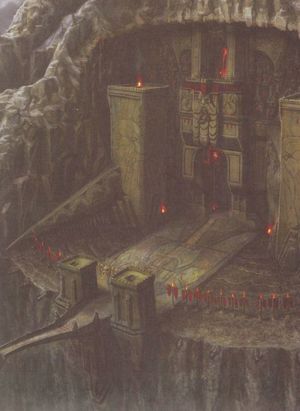 Karak Kadrin is a Dwarf stronghold which guards Peak Pass, an important trading route which runs through the Worlds Edge Mountains from the distant east to the Old World. Karak Kadrin benefits from its position, having become a wealthy trading center.

Karak Kadrin is also an invasion route for the creatures plaguing the lands to the east, who, unchecked, would be free to rampage into the Old World. Despite being besieged countless times, Karak Kadrin has never fallen. Its impregnability is probably due to the fact it has become the home of the Dwarven Slayer Cult, who are naturally attracted to such a contested place. On account of this, Karak Kadrin is commonly known as "Slayer Keep", and is an important centre for the worship of Grimnir, the Dwarf Ancestor God epitomizing fearlessness and fighting spirit.

The Dwarfs and the many outposts they garrison along the route provide welcome security to the caravans in what would otherwise be a dangerous region, as well as keep a vital trade route open. In return, the Dwarfs collect much gold in tolls, paid willingly by merchants.

At Karak Kadrin, a weary Slayer may find lodging, food, and hospitality for as long as he needs it before resuming his quest for death. In return, those Slayers who remain at the keep are expected to help the King uphold his pledge to guard Peak Pass.

The Emperor Dragon Skaladrak Incarnadine slew entire armies from the Hold. [2a]

King Grundin was plagued by greenskins in the lead up to the War of Vengeance, citing them as a much bigger threat than the rumours of the Skaven. He attempted to strengthen his links with the High King Gotrek Starbreaker, but Gotrek's son Snorri refused to marry his daughter Helga. [4a]

Around 1200 IC and whilst the throng of Karak Kadrin fought against minions of the Blood God, Mur'gagh the Thrice Pustulent led his Coterie of Disease up through the catacombs and tunnels. Even the armour of Ironbreakers was little protection against the filth they unleashed and it took only a few hours for the Plaguebearers to overrun the Under Wardens and fill the lower levels with a putrid mixture of blood and effluent. King Kram Starhammer gathered his Runesmiths leading a counter-attack that banished the Daemons with their runic weapons. [6a]

However, even as they were defeated, three Bloodthirsters suddenly appeared in the upper levels, leading the Tetragore of Skullgrind. They slaughtered their way through the hold, heading for the workshop of the ancient Runelord Skalf Ironbrow. They dismembered him and then turned against his works, shattering the precious Anvil of Krong and other irreplaceable runic items. King Kram, weary but filled with anger, was later able to drive the Tetragore from his hold. [6a]

Following the tradition of his ancestors, Ungrim Ironfist, the king of Karak Kadrin, has taken the Slayer oath himself. However, bound by his duties as a monarch, he cannot leave and seek an honourable death in combat. Therefore he fulfils his Slayer oath by providing for other Slayers as they seek to fulfil their vows.

The hold fields an unusual army the majority of which are Slayers.[3a]