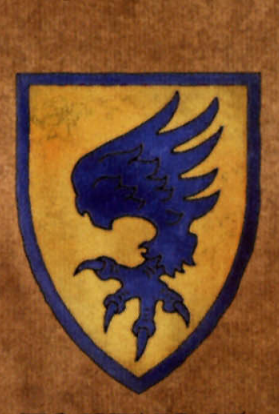 The Dukedom of Aquitaine is a founding Dukedom that lies within the gentle western coast of Bretonnia. Known for having one of the most tranquil lands within the entire Old World, Aquitaine is famous for its highly arable farmlands and its gentle sandy shores. Due to its tranquility and without any external threats to unify this Dukedom's people, this land is extremely famous for its unstable violent atmosphere, with feuds between nobles, peasant revolution and small civil wars being an all too common occurrence.

Nevertheless, the lands of Aquitaine are still a beautiful sight to behold, with their Knights being among the most stubborn and courageous out of all the realms of Bretonnia. The current ruler of Aquitaine is the young, enigmatic and couragous Duke Armand, a Grail Knight of the Lady of the Lake who lives within the high walls of Castle Aquitaine, located within the southern borders of the Dukedom.

Aquitaine lies south of the Gilleau and the Forest of Châlons, and consists almost entirely of arable land. There are a few hills, but nothing so steep as to make pastoral farming the only option. The coastline is the gentlest in Bretonnia, with many beaches, few high cliffs, and numerous safe coves. However, there are no suitable locations for a major port, so the largest settlements are fishing (and smuggling) villages. Inland, there are no major rivers, no obvious crossing points through the low hills, and no particularly defensible locations. As a result, no settlements have grown particularly large. Even the town of Aquitaine is no bigger than medium-size, and that is due entirely to the influence of the ducal court.

Indeed, noble influence is the main factor in town size throughout the dukedom. Noblemen encourage urban development around their castles so that they can tax the trade and become wealthier. So far, these developments have never taken root: when the noble loses interest, the towns shrink again. Thus, there are a lot of towns with abandoned areas as large as the inhabited. The hovels there quickly collapse, but the more substantial buildings slowly moulder away. A similar effect can be seen in Aquitaine’s castles. As there are no naturally defensible locations, the lords of Aquitaine rely on construction to protect their homes. A noble facing attack or possessing extra money extends his castle, and his heirs abandon the parts that are no longer necessary to avoid the expense of upkeep. These abandoned buildings are often taken over by Dereliches, which discourages people from raiding them for building materials and from trying to live in a building surrounded by abandoned structures.

During the reign of Louis the Righteous, the 15th king of Bretonnia, Sultan Jaffar conquered Estalia and in response a great crusade was mounted against him. The Duke of Acquitaine was one of the mighty knights that were part of this endeavour but during the siege of Lashiek he disapeared and was thought lost - however he was found near death and in a coma and died shortly after his return home. [1b]

Three days later he stormed out of his tomb, having transformed into a vampire and went on a rampage of slaughter before raising all of those he had salin to provide himself with an army. He quickly became known as the Red Duke and thousands fled the land until the king himself came forth with an army. Although the Duke tried to ally with the keeper of the Tower of Wizardry, she refused and he was defeated at the Battle of Ceren, his body entombed and his name struck from all records. [1b]

Before the crusades, the province was larger but due to internal strife it was unable to maintain a large enough population to farm all of its land so other Dukedoms were given swathes of it to farm. [1a]

A thousand years after his defeat, the Red Duke was released from his tomb by the Necromancer Renar and began to take revenge on the descendants of those that had defeated him, raising a great army of the undead. [1b]

The people of Aquitaine do not have to fight to defend their land, so they fight each other. Aquitainians themselves prefer to say that they have honour and the courage of their convictions, but the result is the same. Aquitainians have a reputation for being stubborn and for resorting to violence to solve their problems. As a result, their knights are among the most renowned in Bretonnia, and the dukedom is constantly in the grip of several small wars, revolutions, and feuds.

People often leave Aquitaine as a result of a serious disagreement with someone more powerful than they are. Others, particularly nobles, leave to prove their mettle against monsters, of which Aquitaine has remarkably few. Some, of course, leave because they are sick of the constant feuding and want to live somewhere people just get along. These folk tend to keep moving. The internal politics of Aquitaine are in constant flux as old feuds die down and new ones flare up. The new Duke has, if anything, made things even worse, despite his best intentions. Whenever he intervenes personally to suppress a revolt or force reconciliation in a feud, he succeeds. However, if he cannot intervene personally, he tends to do nothing, which means that many other feuds are allowed to develop.

Knights of the land dislike excessive finery and disdain comfort, even on occassion sleeping in full armour and their tournaments are always hard fought and brutal affairs. However they are also proud that no Bretonnian war has ever been fought without at least one knight from the province. [1a]

There are a few famous, ancient feuds which Duke Armand has not been able to resolve (although in these cases, none of his predecessors could, either). The feud between the D'Elbiq and Du Maisne families has continued for several centuries. It was started over the soiling of the daughter of one house by the son of the other, but no one now knows which was which (both houses claim that it was their daughter, of course). This feud has become so formalised that the locations of the battles are set in advance, and people come to watch. The feud is still real, though, so the battles are to the death, which attracts even more people.

A more recent feud is that between the Earls of Desroches, in the west of the dukedom, and Fluvia, in the north. The two men used to be inseparable friends, spending much time at the courts of the land. A little over ten years ago, something happened, and the two have been implacable foes ever since. Both are intelligent, fine tacticians and strategists, and superb warriors in their own right. Most of the time they keep their feud low-key, but as no one knows the cause, no one knows what might cause it to flare up into full-blown war. Between them, the two lords command the fealty of over a third of the nobles of Aquitaine; war between them would devastate the dukedom. Relations between Aquitaine and other dukedoms are generally neutral. Disputes within Aquitaine stay there, and other nobles have more sense than to get involved.

Aquitaine is known for its fine wine with ladies from other provinces such as Bordeleaux and Couronne believing that they have aphrodisiac properties. [1a]