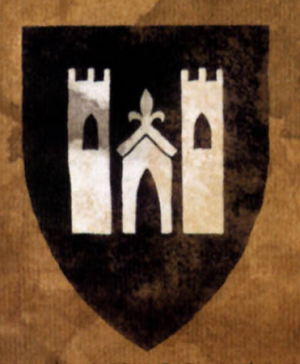 The Dukedom of Montfort is a founding Dukedom that lies upon the eastern borders of Bretonnia, along the central spine of the Grey Mountains. Stretching from the Gisoreux Gap to the north and Axe Bite Pass to the south, the Dukedom of Montfort acts as the central buffer state between the lands of Bretonnia and those within the Empire of Man. Almost all of Montfort lies within the Grey Mountains, with what little arable land being devoted totally to agriculture.

As such, the communities living within Montfort are seasoned mountaineers, used to the harsh environment and the constant threat of Greenskin raids all along its territory. This of course only makes the Montfortians a very tough people, but this toughness comes at the cost of having an extreme degree of xenophobia. Mortfortians are very welcoming of Human outsiders, but anything that is less than Human, such as Dwarfs or Halflings are eyed with extreme prejudice and hate. It's current ruler is Duke Folcard.

The dukedom of Montfort lies almost entirely within the Grey Mountains, running from just south of the Gisoreux Gap to just south of Axe Bite Pass. To the north and west of the Grey Mountains, the border of the dukedom and of Bretonnia runs along the edge of the mountain range, whilst within Bretonnia a narrow strip of pastoral land forms part of the dukedom. There is little farmland within Montfort, and even that is not particularly fertile. The dukedom is barely self-sufficient in food in a good year and must import if there is any problem with the harvest. In a dukedom plagued by Goblins and Orcs, problems with the harvest are common.

Fortunately, the dukedom has two other sources of income. The first is the tolls on Axe Bite Pass. This is the main trade route between the Empire and Bretonnia, as merchant caravans come over from the Reikland and then take ship on the River Grismerie to Gisoreux. The pass lives up to its name. For most of its length, the road runs along the bottom of a steep, narrow V-shaped valley, with only a narrow strip of sky visible overhead. The road is wide enough for two merchant caravans to pass easily, but there is very little space off the road.

It normally takes several days to pass through, so there are inns placed along the route where the lie of the land permits. This has created “Ludwig’s Run” near the middle of the pass, where the gap between two inns is more than a day’s travel. If a caravan really pushes hard, it can make it, and most try to. Almost unique among isolated inns, those two (“Ludwig’s Nose” and “Ludwig’s Toes”) open the gates after dark if convinced that an arriving group is genuine.

The second is mining. The Grey Mountains in Montfort contain a number of rich veins of iron ore, as well as other metals. There is even a single gold mine, the location of which is kept secret. The mountains in Montfort are as sharp as the Grey Mountains in Gisoreux, but whilst the Gisorens do not try to live in them, the Montfortians have no choice. Flat land is for crops and livestock, not houses, so all mountain homes, including castles, are built on steep, rocky slopes.

In 2031 IC the renowned Bretonnian bard Tyness Evain recorded the siege of the powerful citadel of Montfort by Daemons of Tzeentch. Kairos Fateweaver reduced the eastern ramparts to boiling slag killing hundreds of peasant archers before three score Pegasus Knights flew up to assail him, but instead they were confronted by shoals of Screamers. Packs of Flamers of Tzeentch scoured the battlements with fire and Daemon Princes rended and tore through the Knights of Bretonnia. Sir Callain fought desperately to protect the Prophetess of the Lady but finally faltered, his shield shattered and his breastplate smashed. [1a]

Montfortians live in a hostile environment, and it shows. They live for the moment even more than most Bretonnians, working extremely hard and playing even harder when they have the chance. They live in isolated communities, which has two possible results. Either the community becomes extremely close, or it disintegrates under the pressure of internal rivalries and hatreds. Obviously, the communities that are still there are mainly of the first type. Few Montfortians are suspicious of human-looking outsiders, however. Every community has been rescued by knights sent from one of the mountain castles, and every mountain community relies on food brought by outside traders. Non-human outsiders, including Dwarfs, Elves, and Halflings, are likely to get a hostile reception, as the residents assume they are some kind of Orc.

Some Montfortians leave because they get tired of looking at the same rocks every day, others because they do not get on with their neighbours. A considerable number of adventurers leave because they are among the few survivors of an attack on their village. Greenskin attacks are a fact of life in Montfort. Almost everyone has some experience of fighting the Orcs and Goblins, and villages are built to be able to withstand an assault long enough for help to arrive. Axe Bite Pass is the only route wide enough to allow an army to enter Bretonnia, and so it is heavily guarded. Montfort itself guards the Bretonnian end, whilst fiefs have been established along its length. Most of these nobles have encouraged inns in the protection of their castles and deprive their income mainly from taxes and tolls. A few have built castles overlooking the main routes into the pass from the mountains.

Each of these nobles normally controls a mine, which serves as the main source of income. The nobles of the foothills are constantly seeking to expand their holdings, across the River Grismerie and into Bastonne and Quenelles. None are willing to foreswear their Duke, however, so those who succeed are eventually driven back. When challenged by the other Dukes, Duke Folcard promises to do something about it when the Greenskins give him some time. Of course, they never do. Relations with the Empire are excellent. A large part of the Duke’s income relies on traders using Axe Bite Pass, so he is ruthless with nobles who might think that taking land from the Empire is a good idea. Nobles do occasionally push into the Wasteland, but the land there is not worth much, and Marienburg is more worried about Couronne. As long as Duke Folcard maintains official disapproval and does not allow it to get out of hand, the Marienburgers are willing to overlook small incursions.