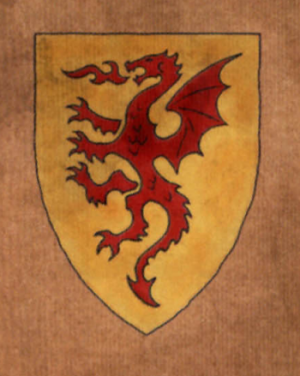 Bastonne is the Dukedom that Gilles the Uniter hailed from, a fact told by its knights and nobles. It is also home to the legendary Calard of Garamont and its Duke, Bohemond Beastslayer. Bastonne is noted for producing many of the greatest warriors in Bretonnia, such as the renowned dragonslayer, Jasperre le Beau, and has the greatest number of Grail Knights in the entire kingdom.

Bastonne contains a wide variety of landscapes. It is bounded on its northern and eastern sides by the River Grismerie and in the south by the Gilleau. The western part of the dukedom is mainly arable, whilst the eastern regions are pastoral. The mountains of the Massif Orcal spill over from Quenelles, and to their west, much of the Forest of Châlons lies within this dukedom. The most notable geographic feature, however, is the Black Chasm. This rift in the earth runs along the northern edge of the Massif Orcal, becoming narrower and shallower to the east, and disappearing just before the border with Quenelles. Where the Massif meets the Forest of Châlons, the Chasm is over two hundred yards wide and so deep it might be bottomless. The Chasm appears to run into the forest, but following it in is rendered impossible by undergrowth, and searching for it from within the forest is always unsuccessful.

Black fogs often arise from the Chasm, chilling those caught within them to the point of death, even at the height of summer. Fortunately, the fogs do not travel far from the Chasm, and even Bretonnian knights have more sense than to build villages right at the rim. The Chasm Spawn are more of a problem, as they can travel further. The Chasm is not entirely a bad thing, however, as it stops the Orcs of the Massif Orcal from raiding into the heart of the dukedom. It also serves to cut off the villages in the mountains. They are ruled by a Baron, Lothar the Ready, who is also a Marquis. He takes his responsibilities very seriously, but he does not really see himself as part of Bastonne. The Forest of Châlons is almost completely uninhabited by humans within Bastonne. There are a handful of logging villages along the edge, but they rarely last more than five years, and it is becoming almost impossible to find people willing to go. The Forest is the haunt of Undead, Beastmen, and even Undead Beastmen, and they frequently raid to the north.

In 950 IC Rosalind, sister of Gilles marries Thierulf, lord of Lyonesse, helping to unite the two realms as does the friendship between her husband and brother. [1a]

Bastonnians like to think of themselves as the heart of Bretonnia. They are the people of Gilles the Unifier, and the dukedom is roughly in the physical centre of the nation. They have more pride in their nation than do the people of any other dukedom, and the worship of the Lady of the Lake is popular with peasants as well as nobles. Bastonnians have a strong tendency to believe that Bretonnians have certain virtues, particularly courage and honour, that set them apart from all other nations, and that Bastonnians display those virtues to the greatest extent. This often makes them rather pompous and chauvinistic.

It also provides the main motivation for Bastonnian adventurers: they are travelling to prove that Bretonnians are superior to everyone else. In the best cases, they strive to demonstrate their prowess. In the worst cases, they spend their time belittling the achievements of other nations, but do little themselves. Bastonne’s nobles contain an unusual number of Grail Knights, and corrupt nobles are far rarer here than in other dukedoms. However, whilst the knights are noble, their stewards, bailiffs, and justiciars seem to be at best venal, at worst servants of the Ruinous Powers. The dukedom is rife with injustice, most of which the nobility would quickly rectify, if only they knew.

Bastonne and Bordeleaux have good relations since the time of Gilles the Unifier, but relations with Gisoreux and, particularly, Montfort are strained. Both of the latter dukedoms are short on land that isn’t either forest or mountains. Montfort, for example, has virtually no land outside the Grey Mountains. The border lords are constantly looking at the expanse of Bastonne and plotting ways to expand their holdings. Crossborder private wars are a constant feature of life, but so far the Dukes themselves have kept out of it.