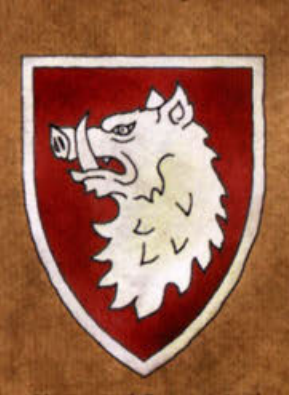 The Dukedom of Artois is a founding Dukedom that lies at the heart of the nothern lands of Bretonnia. Unlike the lush meadows of Bretonnia's other Dukedoms, Artois is famous for being the only Dukedom that is covered entirely by forested wilderness, known by the Bretonnians as the Forest of Arden. Due to this, the Dukedom is in a constant state of warfare against tribes of Beastmen that have made the forest their new dark home.

This of course does little to change the attitude of the people living there. Out of all the Dukedoms, the people of western Artois are perhaps the most adventurous of the lot, mostly out of encouragement then anything else. The current ruler of Artois is Duke Chilfroy, a powerful giant of a man who seeks pleasure in finding and killing the many beasts that lurks within the forest. The ducal capital of the Duchy is the fortified site of Castle Artois.

The land of Artois is dominated by the dense and mysterious Forest of Arden. Apart from a small strip of land in the western reaches, the whole of the dukedom lies within that dark woodland. The land outside the forest is predominantly arable, and is home to most of the dukedom’s human population. The forest is not completely devoid of human inhabitants, however. Apart from woodsmen and charcoal burners, the forest is also home to a number of village settlements. Each of these villages is surrounded by a ditch, bank, and wooden stockade. The stone keep of the noble lord granted the land typically also serves as the gate to the village. The villagers raise animals because, unlike crops, animals can be brought within the stockade when they are attacked.

Attacks are common. Wolves and bears are the least of the worries; groups of Beastmen are far from uncommon. Indeed, a village in the forest can expect to be attacked by Beastmen at least once a year. The Dukes of Artois have long made grants of land in the forest to brave younger sons of Bretonnian nobles because the ones who succeed establish vital outposts against dark forces. However, most fail, and destroyed villages dot the dukedom’s eastern regions. Beastmen are the most common monsters in the forest. For some reason, Artois sees particularly large numbers of Brays, which are generally used as cannon fodder by their Gor superiors. That is not to say that there are few Gors; there are just uncountable Brays.

Other creatures touched by Chaos are also common in Artois, and some lost villages appear to have been torn apart not by the outside depredations of Beastmen, but by mutants arising within the population. Indeed, the level of mutation leads many to suspect that there is a potent source of Chaos somewhere within Artois; anyone who could find and destroy it would be a hero.

The peasants and nobles of the western reaches of Artois are much like their neighbours in Lyonesse or L'Anguille. Indeed, many of them barely think of themselves as Artoin. They like to emphasise how much they are a part of the wider culture of Bretonnia and the Old World, and younger people are encouraged to travel.

The residents of the forest also barely think of themselves as Artoin. Indeed, many of them are only dimly aware the dukedom exists. Those villages sited on a major road might see a traveller once per week, but those further into the depths of the woods might not see an outsider in a lifetime. Leaving the village is regarded as suicidal folly. In most places, people hold funerals for those who leave and assume that those who return are Undead. The nobility travel to the ducal court at least once per year and so generally avoid truly extreme isolation. Residents of these villages, on the whole, know almost nothing of the outside world.

Adventurers from the west of Artois generally leave home because it is expected and encouraged. Indeed, western Artois produces more adventurers per head of population than anywhere else in Bretonnia. Adventurers from eastern Artois usually leave because they can no longer stand living in the same place, hemmed in by the threatening woods. Western Artois is all ruled by the Earl Larret, the cultured scion of a cultured dynasty. He is rumoured to have spent much of his time of errantry disguised as a minstrel, rather than fighting like a proper knight. He has never dignified the rumour with a response, and when he has taken the field, he has acquitted himself honourably. Whatever his background, he is a masterful politician and has made western Artois peaceful and loyal to him, rather than the Duke. He is thought to be planning to petition the King for baronial status.

Eastern Artois is made up of independent fiefs too concerned with surviving in a hostile forest to get involved with politics. The Duke is most active here, hunting down Beastmen and occasionally riding to the rescue of a besieged settlement. Even more occasionally, he arrives in time to do more than scare off carrion crows. Slanderous rumours suggest there are Chaos cultists among the eastern nobility and even that there are villages where the inhabitants willingly consort with Beastmen. The knowledgeable dismiss the latter rumours and worry about the former.

The most widely known noble within the forest is Baron Chlodegar, a Grail Knight. He actually requested lands within the Forest of Arden, and he personally leads a group of his peasants on a trip to the city of L'Anguille every year. He is active in expanding his fief, which now consists of three settlements, and the visits to L'Anguille mean the peasants know far more of the world than most peasants anywhere in Bretonnia. Chlodegar has also overseen the construction of a Grail Chapel in each village, fortified and designed to provide a place to fall back to. Each Chapel has a bell tower, but the bell is only rung to summon help in the case of attack.

Whilst Duke Chilfroy basically ignores his neighbours and rarely attends even the Royal Court unless summoned, Duke Adalhard of Lyonesse is trying to win the Earl Larret over to his fealty, thus expanding his dukedom and confining Artois entirely to the forest. The Earl is resisting, more out of desire for independence than any loyalty to Artois.