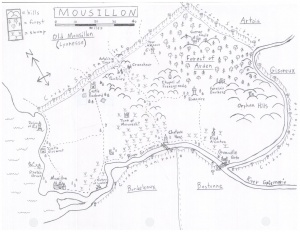 A rough map of Mousillon.

Mousillon or Moussillon is a city and former Dukedom of Bretonnia also known as the City of the Damned. [1a]

The city was built on the banks of the River Grismerie, which floods into the poorer areas every spring, sweeping away hovels and their inhabitants alike. [1a]

Mousillon is a cursed realm, a crumbling city surrounded by stinking marshes and swamps, a land that is shunned by the rest of the country. It is said that in that doom-laden land the dead walk the dark and empty streets, that all manner of unnamed horrors lurk in the depths below castles, and that the night is filled with screams and laughter from beings no longer of this earth. Those dwelling there are the most desperate of people, for none would choose to live in this tragic land other than the evil-hearted and the outcast. Dispossessed and dishonoured knights band together here, as do hordes of the most malformed and diseased peasants. Those few who remain of the cursed bloodline rule this land with absolute authority. These remnants of the decadent and corrupt nobility wear pitch armour, and never raise their visors, or so it is said in fireside tales. The implication is that the nobility of Mousillon have been corrupted by vampirism.

For a period in history, Mousillon threw off its dark reputation. This was during the times of Gilles le Breton and his Grail Companions; for the bravest, most skilled and honourable companion of all was Landuin, the favoured son of Mousillon and their first duke. He was the epitome of knighthood, the paragon that all knights aspired towards, and he was beloved by all. None could stand before his wrath, and Mousillon gained much honour thanks to his mighty deeds.

Tragically, with the death of Gilles, Landuin fell into a terrible malaise from which he never truly recovered. The land of Mousillon itself felt his pain and began to fall into ruin and despair, continuing to do so even after his death. Thus did Mousillon begin to fall back towards being a realm shunned by the other Bretonnian dukedoms. It has since fallen further into darkness. Many believe that the land itself is cursed - it is certainly true that vermin seem to thrive in this foetid land, that many dwelling within its borders suffer madnes, and that many other unnatural things occur on an almost daily basis.

Two key moments in history can be isolated that have irredeemably doomed this haunted land in the eyes of the other dukedoms. The first of these occurred during the outbreak of the terrible red pox, in the early 9th century. After the formation of Bretonnia, the duke of Mousillon, Merovech, was a proud warrior who was desperate for his realm to regain the prestige and honour that it had during the reign of Landuin. Led astray by his corrupt advisors, but with only honourable intentions, Merovech began dabbling in things far beyond his power or control.

When the red pox struck Bretonnia in 835 (1813 Imperial calendar), Merovech and his knights were strangely unaffected. As foul rat-creatures appeared in the thousands to kill and maim, Merovech saw that his time to shine had come. Riding south with his black armoured knights, he slew thousands of the foul creatures, and broke the siege of Brionne. The route his army took mirrored that road of Gilles' Grail Companions before him, as he then pushed towards the east, crossing Carcassonne. His dreams were filled with blood, death and horror. In his delusions, he actually believed that he was Landuin reborn, and that he was the only one who could save Bretonnia.

Meeting up with the armies of Parravon and the fay folk of Athel Loren, a great victory was won, and the rat-creatures scattered before the martial might of Merovech and his most trusted knights. In the middle of the battle, Merovech was soaked in blood, reveling in the killing. Even after his foe lay unmoving, still he continued to hack at them with his gore-soaked blade. The virtuous and honourable knights of Parravon looked on in horror.

Merovech invited the dukes to his castle for a great victory feast. Many saw him as a saviour, for he had saved Brionne and Quenelles. Nevertheless, the banquet horrified the chivalrous dukes. Dinner was served by shambling servants, and the dukes were shocked to see spitted and impaled criminals arrayed about the hall. Merovech could not understand their discomfort at all, and having already drained many goblets of fine wine, he drunkenly claimed that his hospitality was being dishonoured. The king was repulsed by Merovech, and spoke against him and his court. In a rage Merovech accused the king of jealousy, and of plotting against Mouillon. The king formally challenged Merovech, though each of the other dukes begged to be the one allowed to punish the disgraceful knight. In the ensuing combat, Merovech fought like a daemon, and tore out the king's throat with his bare hands. Merovech raised his goblet and filled it with the blood of the king, which he then drank from. The other dukes hastily left Mousillon to gather their armies, pursued by twisted creatures and malformed peasants.

In the following months, Merovech was publicly denounced by the Fay Enchantress and the newly crowned king. Lyonesse led a massive invasion of Mousillon, and many knights of Mousillon gladly took up arms against their liege-lord, having no wish to be associated with the corrupted duke and swore fealty to Lyonesse. Faced with the might of all of Bretonnia, Merovech was finally slain, though many brave warriors fell beneath his blade. The righteous anger of the Bretonnians against one they see as having tainted their honour was truly to be feared.

Later, Mousillon fell even further during the Affair of the False Grail, a terrible time when duke Maldred of Mousillon perpetrated the vilest of crimes. He conspired through treachery to become king, imprisoned the Fay Enchantress, and claimed to have found the Grail, though this was later proved another of his subtle lies created to gain power. His actions doomed himself and finally condemned his homeland utterly, and he eventually died after a prolonged siege. From that moment forth Mousillon was to have no duke, by the order of the king, and so the position remains unfilled.