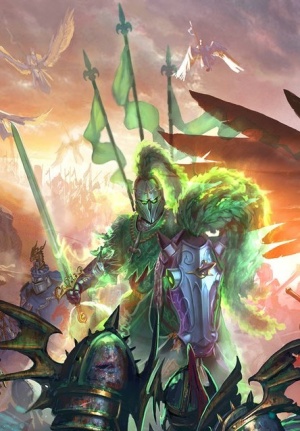 Gilles le Breton, also known as Gilles the Uniter and as the Green Knight until the End Times, was the founder of Bretonnia and one of the first Grail Knights.

His sister Rosalind married Thierulf, Lord of Lyonesse in 950 IC, helping to unite the two realms as does the friendship that builds between her husband and brother. His younger sister Annabel later weds Fredemund, Duke of Aquitaine in 979 IC. [1b]

The Bretonni tribe had many years earlier migrated south just prior to the Battle of Black Fire Pass, unwilling to lend any aid to Sigmar's attempts to defend the Old World against the rampaging Greenskins. By the time Gilles was born the Bretonni clan had inhabited the region which is now Bretonnia for over 900 years.[1]

Ever since the Elves left the region which is now modern-day Brettonia due to the War of the Beard the region had been flooded with the Greenskins. In IC 977, after centuries of infighting between the Bretonni, Gilles proceeded to unite the area and drive out the Orcs and Goblins, fighting twelve significant battles. The Brettonian calendar thus begins when Gilles was crowned King of Brettonia, 977 years after the time of Sigmar and the creation of The Empire.[1]

At one point Gilles and his Grail Companions came across Abhorash, the two mighty warriors dueled, resulting in the Blood Knight swearing an oath of fealty to Gilles and his people. The Vampire later assisted with the construction of La Maisontaal Abbey as part of his life-debt.

Gilles was mortally wounded 18 years after he began his battles, by a hurled weapon thrown by one of the remaining Orc Warlords, near the edge of Athel Loren. As he was dying he had a final vision of the Lady of the Lake, and his followers placed him on a ship in a nearby lake, there he sailed into the mists to do the Lady's bidding for all eternity. It is said he would return in Bretonnia's most dire time of need.[1]

Long before Gilles le Breton encountered the Lady of the Lake and found his destiny, his lands were greatly troubled by the great red wyrm Smearghus. Much of his fifedom of Bastonne was in flames due to the Dragon's rapacious appetite for death and terror. Although the dreaded beast was the size of Sinelle Keep and capable of swallowing whole horses without chewing, Gilles knew that he had but one course of action, for honour and courage ran thick in the young man's veins. Gilles swore to his court that he would return to them either in victory or in a casket.[5]

At the height of summer, Gilles spied a great plume of smoke rising from the village of Sinelle. Preparing his charger, a magnificent beast quite devoid of fear, Gilles donned his armour and rode out over the hills to confront the Dragon. As he crested the rolling foothills above Sinelle and looked down upon the beleagured town, he saw the massive Dragon wheeling and roaring above the market square and systematically spewing great torrents of flame onto building after building. From the vantage point of the hills, Gilles could hear the terrified populace. The Dragon was herding them like a wolf herds sheep. The beast's blasts of flame were carefully placed to form a raging ring of fire around the centre of the town through which the citizens could not escape. Gilles gritted his teeth, swore an oath of vengeance for those he was to late to save, and charged headlong down the hill.[5]

The bright caparison of Gilles mighty Warhorse fluttered wildly as the great wyrm Smearghus swooped overhead and landed heavily in the centre of the ring of flame. As Gilles rode through the streets he saw an unfortunate citizen flicked high into the air before a massive serpentine neck snaked out and the beast devoured him whole. Digging his spurs in and with a shout of pure defiance on his lips, Gilles charged straight through the ring of fire and into the town square. The doomed peasants caught in the Dragon's trap turned to see a shinig, armoured figure mounted on a twenty-hand snarling warhorse barreling through the fires. Flames licked Gilles's hair and livery like a wrathful halo.[5]

As the mighty Dragon turned to face this challenger. Gilles exhorted the populace to take up arms and fight. Such was the charisma of the Bretonni Duke that many took up bow and halberd to fight alongside their lord. Arrows thudded onto the Dragon's neck from the other side of the square but had no effect, indeed the beast was not distracted for a second. Smearghus opened its folded wings with a titanic crack, circled into the air and landed once more to face the oncoming Gilles. The wyrm's claws cracked flagstones as its massive head craned down.[5]

Gilles spurred his warhorse on and leveled his lance with an oath on his lips. There was a deafening hiss with the Dragon's massive intake of breath. Gilles knew a direct blast of flame would make his armour run like mercury and strip the flesh from his bones. He had but a moment to complete his charge, and he knew it was not enough.[5]

Without warning, the beast reared up with an ear-splitting roar. A long arrow shaft protruded from its eye. For a split second, its pallid underbelly was exposed to Gilles charge. The Knight's stout lance slammed home between the Dragon's hard scales, pushed deep into its heart, and then snapped in two. The violent wrench threw Gilles from his horse. with a screech that sent peasants bolting for cover, Smearghus thrashed about in the fires of its own making. Unafraid, Gilles walked forwards into the searing flames and, with a great cry, plunged his sword beneath the beasts eyes. The menace was vanquished once and for all.[5]

After several hours of hard labour and with the aid of the town's blacksmith, Gilles finally managed to cut the wyrms titanic head free from its neck. He took a potion of its iron-hard skin for his cloak and rode back home in triumph that day, the wyrm'shead chained to his mighty warhorse. From that point on, the Dragon became part of Giles's personal heraldry. all who witnessed Gilles's triumph that day knew he was marked for greatness, but none among them suspected that one day all of the Bretonni would be allied under the young Knight's colours.[5]

The Green Knight was Gilles le Breton's disguise during his time as guardian for The Lady of the Lake. He was the champion of the Lady of The Lake and protected the most sacred sites in Bretonnia from those who would seek their destruction. Amongst the Beastmen of the tainted forests, he became known as Shaabhekh, literally the "Soul Killer", for he had slain untold thousands of their kind. Appearing out of nowhere from a glowing green mist to slaughter all in his path, disappearing as quickly as he appeared.

Gilles could alter his body to be as insubstantial as mist or as hard as stone, weapons had little effect on him and cowardly arrows simply passed through him or shattered against his might. Even if slain or defeated, he would simply be resurrected, rising to fight once again.

He was sometimes the final task of a Questing Knight, duelling them to see if they were worthy of the Lady's blessing. He slew many an impure knight, with many more being defeated but managing to prove their worth, drinking from the Grail and becoming mighty Grail Knights.

Bretonnia was in peril, they were without a king, for Louen Leoncoeur had fallen against his own bastard son, Mallobaude the Serpent. Having became a fearsome Vampire, Mallobaude led an army of Dark Knights and undead across Bretonnia slaughtering all in his path. Mallobaude challenged any knights to single combat, slaughtering all who faced him. His final battle would be at Couronne. This time however, it was no worldly knight who stepped forward, but the ethereal Green Knight. Mallobaude and his challenger engaged in a fierce duel, with the Green Knight eventually beheading the Serpent of Mousillon. Deprived of a leader, the rebellion soon crumbled. After the battle, the Green Knight revealed himself to be none other than Gilles le Breton, his ageless face shining with a fay light and his countenance bearing the raw weight of centuries. He was quickly coronated, thus ending Mallobaude's Civil War.

Gilles le Breton would lead Bretonnia's defense during the End Times, with he and the Lady of the Lake appointing Louen Leoncouer as a holy champion. Gilles fought alongside the legendary Abhorash for even he bent knee to the uniter of Bretonnia. In the closing days of the Old World, Bretonnia still stood while the Empire was destroyed. Gilles the Uniter and Abhorash the Vampire fought alongside eachother, armies of the living and dead made a last stand in Bretonnia as the world finally ended. It is implied that Gilles would ascend to godhood alongside Louen Leoncoeur, part of The Lady's plan to save humanity.

Gilles le Breton was a near unstoppable force on the battlefield, even before becoming the Avatar of The Lady he was a mighty warrior and Grail Knight, he was practically unkillable and saturated with the powers of an elder god. Being one of the most powerful warriors to exist in the old world. No one, be it man or monster could ever truly defeat him in single combat, and he was only known to be equalled once, by Calard of Garamont. Even Abhorash himself bent the knee to Gilles and his Companions, with only Landuin said to be the superior knight.

He was blessed with the "Aura of the Fay", a being of supernatural power the Green Knight could never truly be slain.

Gilles le Breton is based very much on the image of King Arthur of British legend, mirroring him in many ways. His twelve battles for example represent King Arthur's wars against the Anglo-Saxons.