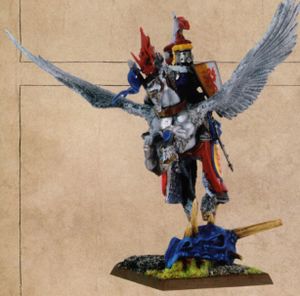 Jasperre le Beau, also known as Jasperre the Fair and Jasperre the Dragonslayer is a renowned Questing Knight from the Bretonnian dukedom of Bastonne.

In his quest for the Grail he has slain many powerful monsters, which made him a celebrated hero. His greatest feat was freeing Isabeau, the King's daughter Isabeau from the clutches of the dragon Malgrimace, killing the mighty beast and taking its claw as a trophy, he became known as a renowned dragonslayer, slaying many of Malgrimaces lesser breed. [1a]

Jasperre was ultimately killed during the End Times, pulled off his legendary steed by a horde of Beastmen

Jasperre rode into battle on a mighty Pegasus. The ability to fly was especially helpful for a Dragonslayer, his skills were further enhanced by his collection of magical items.