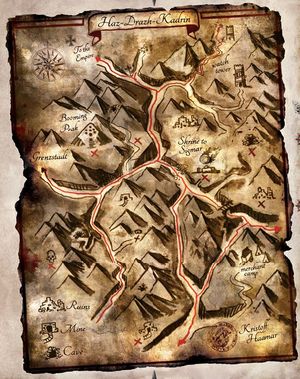 A map of the pass by Kristoff Haamar, considered somewhat dubious

Black Fire Pass is one of two vital routes through the Black Mountains which has seen many battles. [1a]

The pass was part of the old Dwarf road, called by that ancient race Haz Drazh Kadrin. [1a]

The most South-Easter Province of the Empire, Averland maintains a garrison that patrols the pass watching for enemies, much of the force are hunters and trappers, lightly armed and armoured but who are extremely familiar with the terrain. [1a]

The pass lies to the South-east of the Empire and was formed during volcanic erruptions that tore the Black Mountains in two leaving a chasm of lava flanked by glass walls. [1b]

It is named for the glossy black volanic glass walls that arise on either side of the road, which also means it is an excellent place for a small force ot face a larger army. [1a]

In about -500 IC (Imperial Calendar), the Dwarf Thane Stonebeard defeated Waaagh! Red Klaw with significantly smaller force of dwarf warriors. Stonebeard allowed the huge Orc force to break upon his prepared defences and then launched a devastating counter attack with his Longbeards. [1a]

The famous Battle of Black Fire Pass occurred in about -1 IC and was the culmination of Sigmar's campaign to rid the lands of men of the Orcs and Goblins. [1a]

Tarlen da Foeburna’s goblin invasion suffer catastrophic losses at the hands of the Empire’s mortars, all of whom were trained on a single area for maximum psychological effect forcing the left flank of the invaders to break and run, sending panic through the entire army. [1a]

Lord Sossentheim engaged and defeated a force of the Tomb Kings, his Warrior Priests walking the lines and giving rousing speeches, singing hymns to Sigmar, and purifying the dead. The large pike formations he had deployed successfully blunted the charge of the Khemri chariots, and Sossentheim was able to meet and defeat the opposing commander in single combat at which point the invading force crumbled to dust. [1a]

Moving through the pass during the winter, the 33rd Averland Foot were attacked and wiped out by a Orc and Goblin force under Warboss Draig. Draig captured Ulbrecht Sturm, the official Regimental Historian and ordered him to write about the defeat, Warboss Draig and Da Ghostz. [1a]

In 2520 IC, a large force of Orcs were defeated by a Empire force, led by the Emperor himself on Deathclaw. [1a]