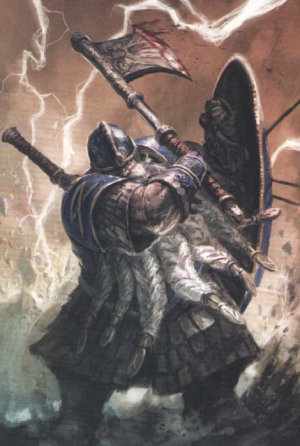 Dwarf Longbeards are the oldest and most battle-hardened warriors within a Dwarf army.

Highly prestigious individuals, these Longbeards garner great respect within a Dwarf stronghold, and are often chosen to be the leaders and advisers of many domestic issues and military campaigns. Only a Dwarf who has reached the age of five-hundred, or has a beard that is touching the very floor will he be readily considered a Longbeard. This ensures that they receive the proper respect from other Dwarfs, who have been taught at an early age and quite rightly so, to always respect their elders and listen to their well-earned wisdom.

Indeed, for it is true that the Longbeards have fought in more wars, beaten more foes, and endured greater hardships than any young Dwarf could possibly imagine. They constantly grumble about how today's Goblins are far smaller and weaker than they used to be, and how nothing is as well made as it was in their day. No young Dwarf would dare argue with them, for they indeed have the experience and the beard to prove it.

Should the Kingdom of the Dwarfs come under siege by their most hated of enemies, the Longbeards would be one of the first to take command. Equipped with some of the most well-crafted Dwarfen armor and weapons within their Clan, these Longbeards muster into their own regiment of crack heavy infantry, forming a unbreakable wall of shield and muscle that few can ever hope to crack. In battle, Longbeards are able to demonstrate this time-won skills, showing little regards for even the smallest shifts in fortune that would throw less experienced warriors into confusion, and enduring punishments that could break the mighty resolve of even a Dwarf. Such is their inspiring presence on the battlefield that the Longbeards provides the army a reliable anchor from which holds the rest of the army together. With the stern gaze of the Longbeards upon them, Dwarf Warriors are far less keen to falter against the enemy onslaught, and fight ever harder to prove their worth in the eyes of their elders.