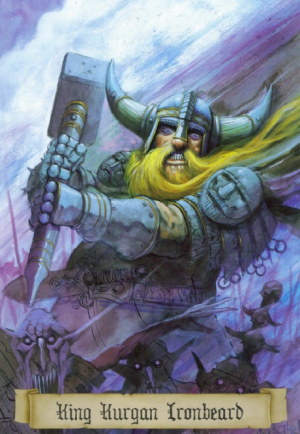 Kurgan Ironbeard was the High King of the Dwarfs and ruler of Karaz-a-Karak during the time of Sigmar.

In IC -15, the King was captured by a party of marauding Greenskins led by Vagraz Head-Stomper but was rescued by the young prince Sigmar to whom he gifted the warhammer Ghal Maraz in thanks. [1a]

Subsequently, Kurgan made treaties of friendship and trade with the Unberogns which helped them to grow in strength and prosperity, uniting the tribes of man under their leadership. At the Battle of Black Fire Pass, Kurgan led the Dwarf forces alongside the united twelve tribes of men under Sigmar's command against a massive army of Greenskins.