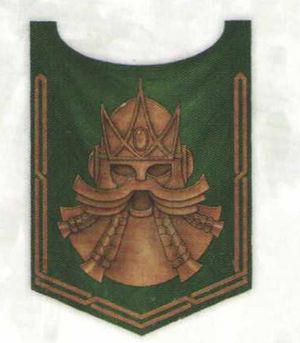 Karaz-a-Karak, the ancient capital of what was once the Dwarf empire, is the cultural capital of the Dwarfs.

It has endured through the ages, and its name translates in the human tongue as 'pinnacle of mountains', although as the alternative translation of the Dwarf for 'mountain' is 'thing which endures', it is often called 'The Most Enduring' or simply Everpeak. Karaz-a-Karak is the oldest, largest, and most heavily fortified of all the remaining Dwarf Holds, and it has never once fallen to an enemy invader.

Although it has lost much of its former glory, as has the entire Dwarf culture, Karaz-a-Karak remains the seat of the High King of the Dwarfs, and the noble clans of the city can trace their lineage back to the Ancestor Gods themselves. In Karaz-a-Karak, the ancient traditions of the Dwarf people endure against the tides of time, solid as the rock from which the great structures of the city are hewn. The city is one of ritual, temples and statues. Honour is given to the great Dwarf ancestor gods of Grungni, Grimnir and Valaya, with their great temples. Also kept in Karaz-a-Karak are the Great Book of Grudges and The Book of Remembering, Great artefacts of the Dwarf people.

The High Council advises the King and, in the lead up to the War of Vengeance consisted of ten Dwarfs including the Runelord Ranuld Silverthumb, the Chief of Lodewardens and the Chief of Reckoners, the Grudgekeeper, Loremaster, Master of Engineers. [8c]

As the Slann Temple cities were attacked by Daemons so too were the Dwarf holds and many fell but when the neverborn turned their attention to Everpeak, the Dwarfs were ready for them. Ku'gath Plaguefather's horde found the outer gate unguarded but when they entered, the the defenders brought the mountain down upon them, obliterating them. The dwarfs within remained for many years before the world outside was safe enough to venture forth. [7a]

The first Slayer is said to be Gudrun, the best friend of a King of the hold, Skorri Morgrimson and who tasked him with protecting his son Furgil as he went into the lower halls of Karak Ungor. Attacked by Night Goblins, Gudrun slew sixty of them, but the prince was carried off by a Troll as the warrior was knocked unconscious. Awakening, he tracked the best to its lair and beheaded it but discovered the prince was already dead. Ashamed, he dyed his hair orange to honour the fiery red hair of the young prince and swore an oath to kill every troll he could find. [5a]

The Orc Warlord Ugrok Beard Burner led one of only two armies to try and besiege the Hold but found even his giant battering ram could make no impression on the stone defences. As he retreated, the Dwarfs sallied forth and destroyed his horde. [5a]

During the Great War against Chaos, High King Alriksson led the throng from his city to aid Magnus the Pious, together with the Kisleites, raising the siege of their capital. Returning home, tired and pained by wounds received he called for a Council of Kings, something that had not occured for three centuries. There they decided a plans for the succession and a year later the Dwarf royalty again gathered for a contest ofdeeds and words. [6a]

After aclaim for Ungrim Ironfist and Buregar of the Angrund Clan Alriksson's sisters son, Thorgrim arrived and presented many once lost relics, now reclaimed by his endeavours. The Norse Dwarf kings spoke highly of his valour in the north before Thorgrim himself spoke, his words and vow so well received that he was named successor. [6a]