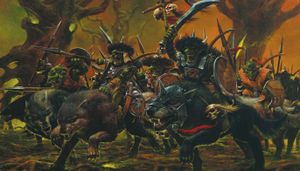 Goblin Wolf Riders are amongst the most feared Goblin warriors to ever plague the open plains of the Warhammer World, fulfilling their roles admirable as a dedicated force of scouts, skirmishers, and fast-moving archer cavalry.

The Wolf Riders originated when Goblins found that they are small enough to fit on a wolf, but big enough to control it[1].

Usually, this cavalry employs its unrivalled speed to pillage ahead of the main army, always on a lookout for any enemy soldiers.[2]

On the battlefield, they act like all light cavalry, using their superior mobility to weaken enemy ranks with shortbow fire before they can retaliate or they might chase down fleeing troops if they get the chance.[2]

While the wolves lack the poisonous mandibles and the ability to crawl up or over anything, enjoyed by the mounts of Spider Riders, they make up for it with their sheer speed; the wolves are faster then most horses, save for the finest elven steeds.[3]

It is still unclear how such a cowardly and pathetic race such as the Goblins were able to tame the wild and ferocious nature of the Giant Wolf is beyond any scholars guess. Some have theorize that perhaps it is their mutual instinct to pick on the helpless, the injured and the isolated that has made them such a good match for the equally malevolent Goblins. Whatever the reason, in time, these Goblins have managed to gain these creatures trust, albeit at a very steep cost, but in the end it was worth it for these tribes of Wolf Riders soon became the scourge of the open plains of both the Darklands and the Badlands, so feared that even the Orcs dare not antagonize them.[5]

Goblin Wolf Riders are dangerously fast light cavalry, able to outrun all other beast save perhaps the fastest steeds of the Elves and Mankind. Thanks to their dire reputation, Wolf Riders are always in constant demand by many Orc and Goblin tribes due in the most part for the ability in finding the enemy and leading the tribes towards their location. Many a large and successful Waaagh! has been led on its destructive rampage by a scouting force of Wolf Riders in the past. Those nomadic trader tribes living within the Badlands have been known to employ whole warbands of especially flea-bitten Wolf Riders to protect their creaking caravans of ragged carts and wagons from other warbands of raiders.[5]

In the most open country, such as the Eastern Steppes or the heart of the Badlands, there can be found what are called Wolf Rider tribes. These consist of entire armies made up of the speedy raiders, perhaps supported by a handful of Wolf Chariots. Even formidable Orc tribes approach the open spaces of the Wolf Rider tribes with a feeling that comes as close to trepidation as their brawny kind allows. The most famous of these sites is located just east of Mad Dog Pass, which is known appropriately enough as the Wolf Lands. On those barren open plains, it is easy for the Wolf Rider tribes to encircle and endlessly harass any intruders who do not pay handsomely for their safe passage.[5]

In combat, some Wolf Rider mobs use bows to shower their enemy with crude arrows from afar. They lope into range, unleash a hail of bowfire, and then retreat before the enemy can respond to their attacks. Wolf Riders often harass the flanks of oncoming troops but have also been known to charge into smaller, more vulnerable units such as artillery crews and enemy scouts. Other Wolf Rider mobs are more heavily-armored than others and it is these Goblins who will dare to lower their spears and attack larger enemy formations in a headlong rush. However, these Wolf Riders are just as cowardice in their nature as anyone of their kind, and as such, are sometimes just as quick to leave the battlefield as they to attack the enemy.[5]