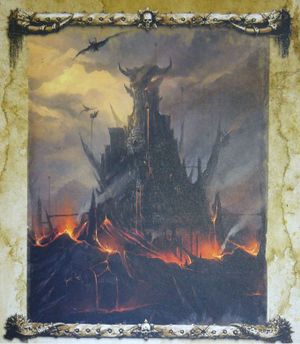 The Black Fortress is large fortified bastion at the edge of the domain of the Chaos Dwarfs. [1a]

It is known as the Throne of Power and the Fire Pit of Hashut and is the home of the Legion of Azgorh. [1a]

Created within a sculpted out mountain, it is surrounded by cinder-pits where molten lava flows as the fortress masters desire. [1a]

In 2510 IC the vast horde of Tamurkhan were met in battle by the fortress garrison when it sought to cross the Dark Lands to attack The Empire. The Chaos army crashed against the unyeilding wall of Dwarf Warriors, their artillery taking a fearsome toll of the horde but after their supply lines were disrupted, the Chaos Mammoths and Knights broke through the lines and the remaining members of the Legion were forced to retreat as best they could to the fortress. [1a]

Tamurkhan then offered them a chance to join his invasion of the Empire which after consideration Lord Drazhoath agreed, the pact agreed allowing the Legion the pick of prisoners and plunder in exchange for their aid in the siege of the city of Nuln. [1a]

A cult of disgraced warriors who make their home in the lower caverns, the Infernal Guard labour to redeem themselves in the eyes of Hashut. [1b]

The Legion is a large standing army whose task is to defend the southern Dark Lands against invasions by Ogres and Orcs from the east and safeguard slave caravans moving through the Howling Waste. Although renowned amongst their own kind for their warlike nature and brutality, the posting to the Black Fortress is also seen as a form of exile - far from the Great Temple to Hashut. [1b]