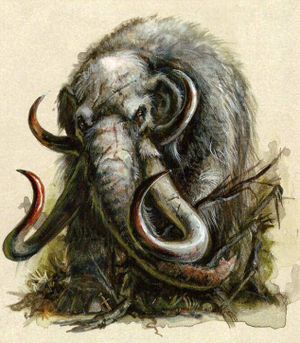 Mammoths are huge creatures that can still be found in the north. [1a]

As they grow they consume large quantities of food, often tainted by Chaos and hence the herd often becomes mutated and agressive. [3a]

Northern tribes seek out calves abandoned by their mothers and train them to become a near unstoppable weapon of war. [3a]

They roamed the colder world that existed before the Old Ones moved the planet closer to the sun, warming it. Rarely they are found in a circus or other shows in the Old World and are also raised to carry warriors into battle by the Norse. [1a]

They can also be found in the cold lands of Naggaroth and were hunted for meat when the Dark Elves first arrived. [2a]

Most of those that stray south are luckily rogues as a whole herd is a devestating force. [3a]