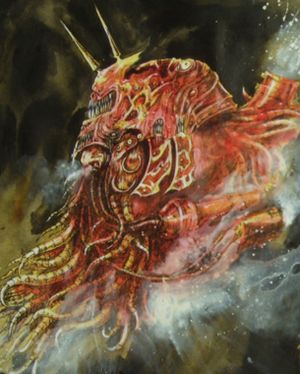 Tordrek Hackhart is a renegade Dwarf Master Engineer, commander of the Black Kraken and member of the Dreadfleet. [1a]

Once a member of the Guild of Master Engineers, working alongside Brokk Gunnarsson. Although Tordrek was still considered the master of submersible engineering but became increasingly jealous of the accolades given to Red Brokk, something that festered over several decades. Then one day, in the shipyard, Tordrek accidently shot Brokk a dozen times with a rivet claw but failed to kill him. For this crime, Hackhart was banished from Barak Varr but took his most advanced creation, the Black Kraken with him. [1a]

He headed north, fighting his way past merwyrms near Albion and into the Sea of Claws where even more formidable foes awaited him - finally he found his way to Zhugulzar, the Chaos Dwarf port. [1a]

Later he would form a pact with Count Noctilus and join the Dreadfleet aiming to destroy Red Brokk. [1a]