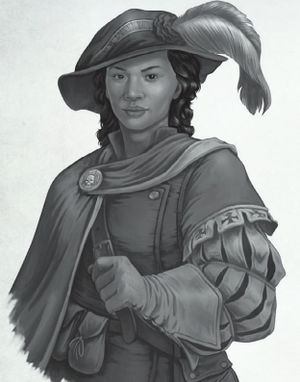 She is Short with a mischievous, heart-shaped face, wearing her dark hair in curls that spill out from beneath a practical but fashionable hat. She wears a mixture of high-end men’s and women’s fashion, including trousers that are comfortable to duel in - she is always armed. [1a]

After being orphaned in her early teens, Guttra was brought up by her second cousin, the Marienburger businessman Tarkat Luger. Despite the constraints of his household, Guttra soon made herself a famailiar and welcomed face in the drinking holes and cramped playhouses of the notorious Suiddock district, playing dashing rapscallions on stage, wearing a combination of men’s and women’s fashion and fighting with increasing skill with the rapier. [1a]

She became a favourite of noble rakes with her bawdy, carefree, shows, and within a few years Guttra was singing and dancing in the Aardbol Theatre in Goudberg. Her success was threatened when the spouse of one of her many trysts challenged her to a duel, confident that Guttra was only a stage-fencer. The nobleman underestimated the young thespian, and died for his folly, although the duel should have been to first blood. [1a]

Before any action could be taken, Guttra was hired as the Judicial Champion of the Director of the city himself, considered the richest man in the Old World who saw her as not only perfect accompaniment to his prestige — but perhaps more improtantly - a deft hand with a blade. [1a]