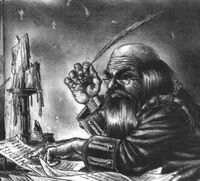 Arkat Fooger is one of the Ten, the merchant lords of the Directorate of Marienburg in the 25th Century IC. [1a]

Aged 117, he is the longest serving member of the Directorate. [1a]

His father, Roenekaat Fooger, spared no expense for his education as he groomed him for taking over the business and over the decades he built his clan's fortunes until he was elevated to the Directorate in 2428 IC. [1b]

Having literally invented the insurance business, Arkat is having to pay for a series of shipping losses that are straining his finances and suspects that this is more than bad luck. [1a]