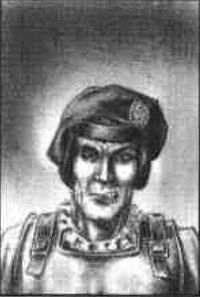 Theophilus Graveland is the Watch Captain of the Suiddock District in Marienburg in the early 25th Century IC. [1a]

In his early forties, he is tall and lanky with piercing grey eyes and usually a withering sneer,[1a]

He was born in the village of Kalkaat and became a Bounty Hunter, finding he had ability to effectively hunt and track pirates and smugglers. [1a]

He gravitated to the city of Marienburg and became one of the Black Caps in the Suiddock, rising through the ranks and refusing promotion that would take him elsewhere. Eventually he became the Watch Captian for the District. [1a]

He is the occasional lover of the fiery Hilaria om Klimt. [1a]